How virtual reality is transforming the enterprise 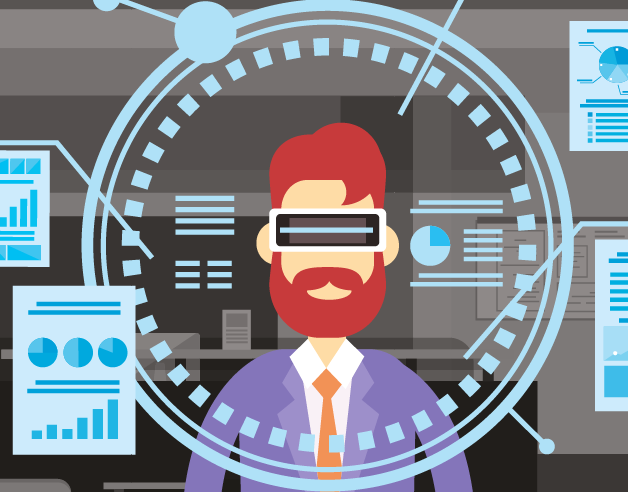 Virtual reality (VR) may seem like a very recent phenomenon, but the concept of tricking the human senses into a man-made reality can be tracked back hundreds of years.

Technology developments in the 1800s included 360-degree immersive panoramic paintings that could transport users to major historical events, and stereoscopic pictures that delivered a sense of depth to the viewer by displaying a separate image for each eye.

The desire to do this began in entertainment and has largely remained the key driver up until more recently. Over the past few decades, huge leaps forward in technology have meant that each of the five human senses can be stimulated in a more convincing way – from hi fidelity audio, and visual recording and creation, through to the ability to stimulate smell and touch.

Developments in VR have certainly sped up dramatically in recent years. Facebook’s $2 billion acquisition of Oculus remains one of the technology’s most significant moments, while a growing number of products have hit the market, including HTC Vive headsets and an array of compatible games.

Furthermore, almost every new smartphone can now be used in conjunction with a VR headset, ranging from the build-it-yourself Google Cardboard to Samsung’s Oculus powered headset. PlayStation’s own VR headset will hit shelves this month, and may well prove to be the real game changer.

The most successful VR games to date appear to be those that have been created specifically for a VR platform. However, the big franchises are also starting to experiment with VR features, such as this year’s Tomb Raider instalment, which has been handily timed to coincide with PlayStation’s October headset release.

And as the availability of devices increases, the consumption of entertainment of all kinds will be opened up to the vast potential of the VR experience.

NBC made the Rio Olympics the first major sporting event to feature VR coverage, albeit only via the Samsung Galaxy VR headset. In February, British electronic band Years & Years became the first to perform a live streamed VR gig, and some film studios are already providing VR content to support big releases.

But it isn’t just gaming and entertainment that is set to be revolutionised by VR.

In April, an operation to remove a malignant tumour was live-streamed in VR by Barts Health NHS Trust in London, with armchair viewers and, more importantly, medical students able to view the operation in 360 degrees on any compatible device.

The surgeon who carried out the operation has set up a company through which he hopes to use VR in order to train students around the world, especially those in developing countries who may not have the resources and facilities of NHS hospitals.

‘The potential is huge and is likely to grow exponentially,’ says Dale Green, marketing director at Digital Realty. ‘The list of fields that could benefit when everyone has easy and reliable access to a VR platform is almost endless, and increasingly exciting.

‘Everything – from how you talk to your friends on Facebook to viewing a property – will be changed by the virtual revolution. We are seeing the beginnings of this now, but it is likely to be several years before the true extent of VR influence becomes clear.’

It’s still early days – and businesses are still trying to understand the potential of VR for enterprise applications – but there is definitely an emergence of start-ups addressing and exploring the true potential of this field.

In the retail space, for example, innovations in VR have allowed consumers to experience products, or configurations of products, that are not physically in a store.

However, the lack of hardware availability on the consumer side has so far limited the effect of such technologies, as well as the commercial potential for retailers.

The key driver for retailers is to generate more revenue at a lower cost. The trick for innovators is to find ways in which VR can do this.

Hardware costs are typically fixed, but businesses must also factor in ongoing software development, maintenance and training costs for VR deployment in the commercial world.

‘The hardware is not widely available on the consumer side,’ says Hordagoda. ‘This means I still have to travel to the store to experience the VR. This will change in time, though, and as soon as we have a critical mass of people with home VR tech, the investment in this space with grow at an exponential rate.’

Attensi, a Nordics-based firm, has been using a variety of head-mounted displays to develop training simulations for several industries.

The main challenge of VR is always around return on investment – having technology that is simply ‘cool’ does not drive adoption in the enterprise space.

Having a technology that delivers a real commercial value, which outweighs the cost of delivery, is the key to all enterprise deployments – and VR is no different.

‘We’re at the point where the technology is convincing enough to throw a user into a convincing virtual experience, at a more manageable cost,’ says Hordagoda. ‘When you have major players like Samsung giving their VR headsets away with their mobile phones, we’re at the beginning of a tipping point.’

Awareness is another major barrier. In a recent EU-wide study by Context, only 9% of the general public thought VR could help them with workplace challenges.

As awareness grows, so too will deployment of B2B VR tech. Software such as Big Screen Beta on the Rift/Vive – which allows up to four people to sit in a virtual space with visibility of each other’s screens – demonstrates the opportunities available to businesses.

‘This is the closest attempt yet to a virtual office – something that will become increasingly of interest to businesses struggling for office space or restricted by high rental prices,’ says Wagstaff. ‘I expect to see more AV vendors moving into the VR space.

‘At a recent talk at IFA 2016, I was surprised by the number of industry professionals who approached me afterwards to admit that they had no idea of the wide range of potential business applications of VR.’

There is also a shortage of skilled VR software developers. A worldwide survey from Crytek’s VR First initiative showed that higher education institutions had an average of 1.5 head-mounted displays (HMDs) each.

‘There’s a high level of training involved, and convincing staff that the technology is there to help them in their job is another important element,’ says Hordagoda. ‘Some employees are more receptive than others to change, but this is definitely a key focus for our success.’

>See also: Augmented reality vs. virtual reality: what does the future look like?

As processing power increases and businesses find more innovative ways to convince and stimulate the mind, VR will increasingly play an influential part in people’s lives.

From medical and industrial applications to the continuation of entertainment in pushing the boundaries, the impact will be seen across numerous sectors and business scenarios.

‘Enterprise stands to benefit hugely,’ comments Hordagoda. ‘The focus for GoInStore will of course be to continue pushing the “immersiveness” of our technology, removing barriers such as distance and time to give a true virtual in-store experience to customers anywhere in the world.

‘Our technology can deliver sight and sound at the moment, but who knows how long before we are able to tackle touch, smell and even taste. The mind boggles with possibilities.’