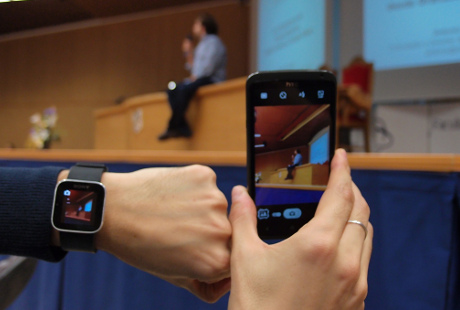 Shipments of wearable devices including smart glasess and watches will be almost 130 million by 2018, according to the latest estimates from analyst firm Juniper Research, in its report 'Smart Wearable Devices: Fitness, Healthcare, Entertainment & Enterprise: 2013-2018.

The figure is ten times higher than projections made earlier this year, and far exceeds the latest estimate on tablet shipments by Gartner, who said they are expected to reach 184 million units by this year.

Juniper attributes the major increase in adoption levels to heightened consumer awareness of wearable technology and new product launches. It also observes that with the emergence of major players and other key stakeholders, there is much more of a focussed approach towards wearable computing.

Competition is expected to intensify, with a host of new offerings emerging now and in the next few years.

Report author Nitin Bhas notes that at the moment wearable devices market is far from approaching maturity, and so they represent a 'nice to have' and not a 'must have' for consumers.

But even though 'wearables are relatively new in terms of market maturity,' says Bhas, 'it is clear that the market, for example the smart watch in particular, will be – as per smartphones – a somewhat crowded affair.'

However, there are still a number of social and legal barriers to market that potential device makers and vendors will have to content with – issues such as privacy commonly arise if the wearable device has a camera and gives the appearance of filming at all times.

However, not all of these hurdles will apply to every device, or indeed, every type of device, says Bhas.

Juniper expects the currently booming fitness wearable device market to diversify into new mHealth areas, but wearable devices around healthcare are likely to bring up the most issues in terms of the storage of confidential patient information.

As more wearable products are rolled out, Juniper says that governments will in turn seek to develop regulatory frameworks to legislate their use, both from a privacy and data protection perspective.