Skip to content
Home » Mobile Apps » Which Formula One team boasts the most innovative tech infrastructure? The answer may surprise you

Which Formula One team boasts the most innovative tech infrastructure? The answer may surprise you 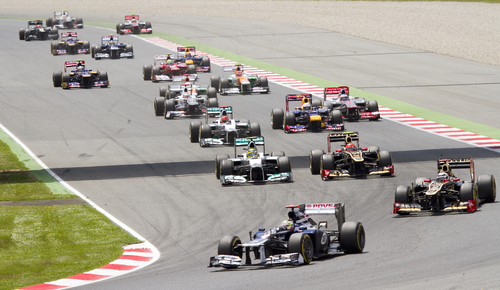 Should you take a straw poll of Formula One fans on which teams they believe to have the most impressive innovation, UK-based Caterham F1 is unlikely to feature.

Frankly, innovation is usually associated with success, and Caterham F1 has really been anything but successful since debuting on the track in 2010.

In May this year, it became the record holder for the most race starts without scoring a single point; a fact that is likely to have impacted AirAsia CEO Tony Fernandes’s decision to sell the team to a consortium of Swiss and Middle Eastern investors last month.

Shortly after, the new owners laid off more than 40 of the team's 350 staff to reduce costs, and are now facing legal action for unfair dismissal.

>See also: How Marussia automated its businesses processes to accelerate its F1 calibre

However, if you look deeper, and speak to the team’s CIO Bill Peters, you’ll find a great innovation story in a sport where technology is more important than any other.

Peters has been in IT for more than 30 years. After graduating from Greenwich University with a degree in engineering, he almost immediately set up a company doing telecom installations.

However, his calling in the automotive industry came when developing PRP systems for the original Lotus in the 90s. During a time when there was a lot of transfer between Lotus and McLaren, he joined the latter to work on its business systems.

“I went to McLaren on a two-week contract to have a look at their systems for the automotive business – and I left 13 years later.”

However, in 2009 came discussions around Fernandes’s new team, and Peters was approached by old colleagues.

“McLaren had become quite corporate – I missed the kind of ‘garagista’ attitude and fancied a change,” he says. “The opportunity to set up an F1 team was pretty good too, so I took a bit of a risk and came on board.”

Peters joined as CIO and Caterham F1’s fifth employee at the end of October 2009. There was an empty factory, no infrastructure in place, and half the budget Peters’ enjoyed at McLaren. Still, he faced the mammoth task of getting two cars on the grid for the start of the 2010 season five months later.

What followed was a "very quick and dirty" supply and selection to set up a trackside infrastructure, factory infrastructure, HPC (high performance computing) environment, and all the necessary business applications and engineering tools.

With the pressing time, and not even an IT team for support, Peters decided an end-to-end solution was the only way to go.

“I knew what I was looking for and had a pretty clear high-level design mapped out,” he says. “And I just really wanted someone who could fulfill as much of that as possible.

“In terms of what we were looking for, cost was very important to us because we were a very small team with a very limited budget. We were looking for responsiveness and the completeness of the solution, but also a commitment to deliver.”

If Caterham didn’t get the cars on the grid in time to race that season, it would have cost millions. The pressure of that timeframe meant most suppliers excluded themselves from the process.

“Really, it was only Dell that ticked all the boxes,” Peters says. “Our relationship from the beginning was on a fit-for-purpose and a commercial basis, and they did what they said they’d do.”

Peters’ bold move to virtualise the application servers was deemed risky by many in an industry where such deployments are lacking, but Caterham’s leanness allows a more flexible approach to innovation.

By doing so, it has enabled the trackside team to reduce the weighty footprint they must lug all around the world.

Furthermore, the end-to-end solution has enabled Caterham to really optimise the tools for performance. The team uses standard off-the-shelf hardware, but the strong level of optimisation makes the performance high spec.

The leanness will also allow Peters to take it a step further in the next out-of-season refresh period by migrating the team’s trackside infrastructure to two converged boxes.

The Intel Xeon-powered Dell PowerEdge VRTX – which combines storage, networking and compute in a single, virtualised and integrated unit – doesn’t require any special power or cooling.

From next season, Caterham F1 will have one unit running trackside, and one disaster recovery (DR) replicate acting as back up.

“They basically come in a box the size of a workstation,” says Peters. “In terms of its capacity and capabilities, it’s probably more powerful than what we have now, simply because we’ll have more blades in there. At the moment we have a half rack and garage rack trackside.”

However, Peters’ ultimate ambition is to put everything in the cloud, reaching a stage where trackside infrastructure is essentially delivered as a service.

He plans to continue to virtualise the infrastructure until his staff are used to managing the abstraction the environment provides, then to migrate things like the team’s ERP systems and office applications.

He will then assess how many mission-critical applications are suitable for the cloud.

“I would like to have trackside in the cloud,” he says, “but it really depends on the direction that cloud goes in and the direction that this sport goes in because I think we’d need some local facilities to host and almost deliver the tracks as a service.

“Whether that will happen in the foreseeable future, I’m not sure. Certainly putting the business system in the cloud will definitely happen – we’re due for a refresh around 2017, which is hopefully the time we’ll be able to move fairly wholesale to the cloud.”