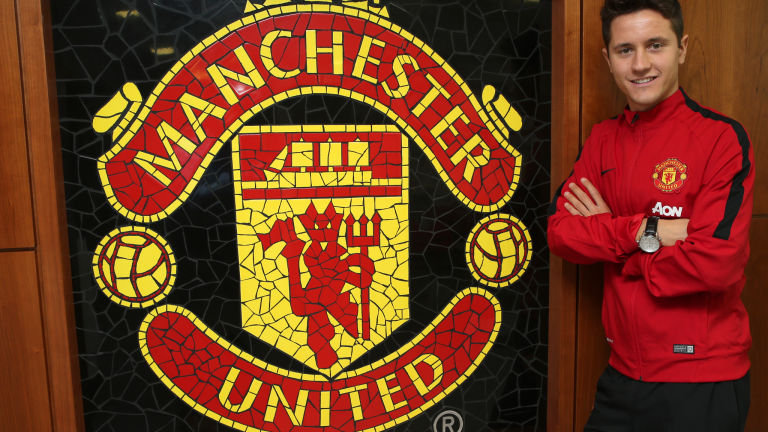 Football is missing an open goal when it comes to technology. Don’t worry, this isn’t another article bringing up the goal line technology debate (which frankly, after the near apocalyptic arguments of recent years, hasn’t caused the slightest problem at the World Cup), but, believe it or not, fax machines.

You may not be aware of this, but multi-million pound deals involving some of the most finely tuned athletes on the planet (and their finely tuned sponsorship deals), who live some of the most glamorous and tech-savvy lifestyles (from performance analysis to the cars they drive), are often completed with a fax machine.

To understand the tensions in the world of football transfers, you only need to look at Manchester United’s saga with Ander Herrera.

After a failed pursuit by (now former) Manchester United manager David Moyes last season, this year’s summer transfer window also saw United’s first bid rejected. Herrera conducted a medical and flew to Manchester to finalise the buy, in an extended series of bargaining that included the footballer paying his own transfer fee. After causing one hell of a stir, the bid was accepted and went through.

But this little piece of drama is nothing compared to the stress at the 11pm closing of the transfer window – the next one being the end of the summer on 1st September. This is a time when boardrooms become furnaces, fuelled by the friction of clubs and players striking deals… and completing paperwork.

The ‘completing paperwork’ bit probably seems an anti-climax compared to the glamour of football. But those documents are legal requirements to allow some of the planet’s best players to compete in one of the world’s finest football leagues.

As with any legal or business transaction, high-value transfers can only be approved if the correct forms are signed, covering medical forms, transfer agreements between clubs, player wages, international clearance and visa issues.

It’s a shame that football – an industry at the forefront of performance management, sports science and sponsorship – is so behind the times when it comes to ‘paperwork.’

The reliance on a fax machine churning out paper at 22:55, with just five minutes before deadline, is ridiculous really. The equivalent in match terms is putting players on a long bus ride to play on a slopey pitch full of potholes. It’s just not how the game operates today.

Many years ago, the property industry began a debate that has subsequently caused a shift in legislation and professional behaviour. This was in relation to e-signatures, and their ability to streamline the exchange of legally binding documents.

The Electronic Communications Act 2000 enabled the legal finalisation of contracts via electronic means, while in 2001 the Law Commission published a paper advising the government that requirements for writing a signature can be legally satisfied by electronic means. This was just the start.

This opportunity to do business more efficiently and flexibly has delighted the players in the world of property sales and letting. More than 50,000 letting and estate professionals use DocuSign to sign and send millions of documents – encompassing residential and commercial real estate, property management, mortgage documentation and more.

The property sector as a whole is far from having made a complete transition to e-signatures, but they are being used to great effect already, and uptake looks set to grow and grow. With sentiment today so geared to the immediate, and working behaviour no longer as locationally specific, the property industry isn’t being left behind.

Get your fax straight

Football is yet to take on the innovative approach that’s developing in the property market. To this day, players are required to sign in-person, or fax their contracts through to numerous notaries, which causes huge delays and leaves all parties lacking a digital audit trail.

The question is, why is new technology not being adopted off the pitch, as happens on the pitch through goal-line technology? Brands like Manchester United, paying £29m for Herrera, shouldn’t be operating like a 1990s business. The stakes are too high.

Football clubs could have their high value players’ medical and contractual documentation signed and processed through an entirely digital platform, which would reduce the lead times and stresses associated with the process. Players still involved in the World Cup’s latter stages could still be signing new contracts from the team training camp or their hotel room. All it would require is a mobile device.

This isn’t an unprecedented move.  In the US, electronic signatures have been adopted by the NFL Player’s Association in order to avoid such a contract-signing fiasco happening again. And it’s a pure good news story for the clubs themselves, removing the need for expensive air travel or agents to be flown all over the world.

Digital transaction management (DTM) and eSignature technology could turn the transfer window into one of the high points of the season, instead of a pit of stress and despair.

This technology should be grabbed with both hands by the FA, to allow the beautiful game to fully modernise the way it does business. In fact, the game would be even more beautiful with the economic and environmental benefits associated with DTM.

Fans have enough heartache during the season and in major competitions, so the FA and football clubs should make the transfer window a little bit easier for them – instead of worrying that the dear old fax machine is going to force them into scoring an own goal.