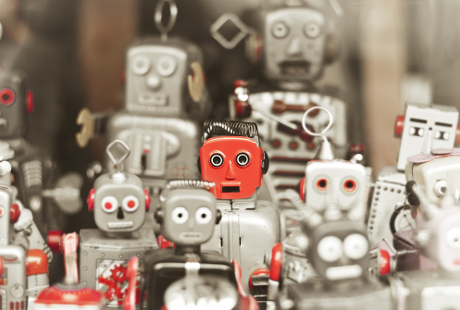 Telemarketers, insurance underwriters and watch repairers beware – your jobs are among the most likely to be automated in the near future.

That is according a study from the Department of Engineering Science at the Oxford Martin School, which developed a new technique for evaluating the likelihood that various jobs will be computerised.

The study found that a staggering 47% of US jobs are "highly likely" to be computerised in the next decade or two.

This is significantly more than would have been predicted just 10 years ago. In 2003, a group of economists hypothesised that, whether manual or cognitive, only repetitive, ‘routine’ jobs were likely to be replaced by a computer or robot.

But in their fascinating new paper, Drs. Carl Benedikt Frey and Michael Osborne argue that recent developments in artificial intelligence and robotics mean this is no longer the case.

Firstly, the exponential growth in data from the web and other sources means that algorithms can be tested more quickly and more exhaustively, and so the pace of evolution in the field of machine learning has accelerated.

Secondly, the increasing mobility of robots – thanks to more intricate engineering, as well as developments in artificial intelligence – means they can undertake an increasing number of physical tasks.

Together, these technological developments mean many non-routine jobs are now face at risk computerisation.

"Any part of your business which is about spotting irregularities is potentially a fruitful area for automation"
Dr. Michael Osborne
Oxford University

There are still things that computers and robots cannot do. Frey and Osborne identified three categories of human activity which they describe as "bottlenecks" to computerisation.

The authors then analysed (algorithmically, as it happens) a dataset from the US Department of Labor called O*NET, which gives a detailed description of 903 occupations. For each job, they assessed how it involved any the three "bottlenecks", and thereby calculated the likelihood that each job might be computerised.

Some of the findings are straightforward, but Frey and Osborne's model makes some surprising predictions, such as the high likelihood of certain sales jobs to be computerised.

"High risk sales occupations include, for example, cashiers, counter and rental clarks and telemarketers," they wrote. "Although these occupations involve interactive tasks, they do not necessarily require a high degree of social intelligence."

Here are the 12 jobs that the study found are the most likely to computerised “over the next decade or two.”

12 most likely jobs to computerised (probability: 99%)

Are here are the least likely:

One way in which businesses might use Frey and Osborne’s research is to identify operational areas that are ripe for automation.

Osborne told Information Age that recent developments in artificial intelligence mean that any job that involves sifting through information to spot irregularities – such as fraud detection or auditing – could be a potential application of machine learning, as computers are less susceptible to bias and to boredom.

“Any part of your business which is about spotting irregularities is potentially a fruitful area for automation,” he said.

So what does this mean for the future of the global economy? Frey and Osborne are keen to point out that they are not predicting the overall impact of technology on the jobs market, simply identifying those jobs that are likely to disappear.

In fact, Osborne says, by making existing industries more productive and spawning altogether new industries, computerisation should lead to the creation of new low-paid, low-skill jobs to replace the ones it destroyed.

What it really means, then, is that the pace of change in low-skill, low-wage jobs will be much faster than in the higher end of the jobs market.

But change has always been a constant in the employment market, Osborne observes. "In 1900, 38% of US employment involved in agriculture,” he says. “Now its less than 1%. After WWII, there was a huge influx of women into the workforce.

“There have been seismic changes in employment in the last 400 years and yet unemployment has remained roughly constant."

Still, with 47% of jobs apparently up for computerisation, this is something that governments and societies must address. For educational policy, for example, the paper’s predictions would suggest the need for an emphasis on creativity and social perceptiveness, Osborne says.

Perhaps the most interesting – and worrying – part of Osborne and Frey’s paper is their speculative prediction of a ‘second wave’ of computerisation.

This would occur if, in the distant future, artificial intelligence overcomes the three bottlenecks – in other words, when computers develop social and creative intelligence. At that point, no current job will be safe from automation.

What will we do then? “Jobs would have to shift to the remaining activities in which humans still have a competitive advantage over computers,” Osborne says.

And what might they be? “We don’t know that yet.”