Why US telcos are eyeing European acquisitions 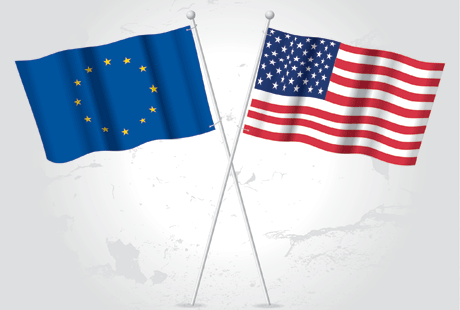 The US and European telecommunications industries have historically operated as very separate universes.

In both cases, national incumbent carriers have given way to local operators, and there has been relatively little cross-Atlantic integration. That seems to be changing, though, with a number of US telcos vying to buy their way into the European telecommunications market.

Then, in March, reports surfaced that two major US carriers, AT&T and Verizon, were in talks to take over Vodafone, the UK’s second-largest mobile operator. According to the FT Alphaville blog, the rumoured deal would be worth $245 billion – the biggest acquisition ever.

AT&T declined to comment. The telecommunications giant has long been thought to be seeking a European acquisition, though, and has been linked to EE, Three, Colt and Dutch incumbent operator KPN.

Verizon, meanwhile, confirmed that it would be interested in buying out Vodafone’s share of their US-based Verizon Wireless joint venture, but insisted that it does not “currently have any intention to merge with or make an offer for Vodafone, whether alone or in conjunction with others”.

Valid or not, the acquisition rumours come at a time when the European telecommunications industry is in decline.

In 2011, it shrank by 1.5% to €274 billion, according to lobby group the European Telecomunications Network Operators Association – the third consecutive year of decline.

In the same year, the UK’s telecommunications market shrank by 1.9% to £39.7 billion, according to Ofcom. The increase in mobile and fixed-line data services failed to compensate for the ongoing decline in voice revenue, the regulator found.

The situation does not appear to have improved in 2012. In February, Vodafone blamed “very difficult market conditions in Europe” for its 2% drop in sales to £11.4 billion in the last quarter of the year.

By contrast, the US operators have been living high on the hog. One reason is that, in order to meet growing demand from smartphone users, Verizon and AT&T deployed LTE mobile networking services earlier than their European counterparts. This has paid dividends, says Margaret Schoener, research director at Gartner’s technology and service provider division.

“The big US firms have been very successful with their data plans, and the US seems to be ahead of the rest of the world in terms of LTE adoption and usage,” she says.

Clearly, then, the US operators see the troubled European market as an opportunity to expand. “It’s a good time to look to invest in other markets,” Schoener says.

In January, AT&T CEO Randall Stephenson addressed the rumours of its European expansion plans. “The mobile Internet revolution [in] the US has been outpacing the rest of the globe fairly considerably,” he told investment analysts. “Most people expect that the rest of the world will catch up, and so the question you have to ask is: are there opportunities for us to participate in that growth?”

This does not necessarily mean buying a local operator, though, Schoener explains. AT&T may simply sell some of its mobile platform to European operators. “One example is what they’re calling a ‘Digital Life Platform’, a home security and automation system that they’ll be selling in Western Europe from spring.”

Still, with US telcos looking abroad with intent, and the local operators at a low ebb, an acquisition of some kind seems highly likely.

Emeka Obiodu, principal analyst for communications and broadband at Ovum, says the European industry looks ripe for a bargain. “When a player looks across from the US, what they see is cheap assets that they can snap up,” he says.

Furthermore, there are ample opportunities for consolidation. “Around five US broadband telcos are using a single corporate structure to generate revenue from around 300 million telecoms customers,” Obiodu says. “In Europe, there are over 50 telcos sharing the same pie.”

If the European providers wish to remain independent, Obiodu argues that they must reduce this market fragmentation, to achieve the same kind of scale of AT&T and its ilk.

This is already under way, in fact. “EU telcos are laying the foundations to overcome some of the structural challenges they face, which is why we see a lot of network sharing,” explains Obiodu. “Vodafone and O2 have outlined plans to build a giant LTE network in the UK, while in Spain Vodafone and Orange have plans to launch a joint fibre network.

“All of this is aimed at taking out cost from the business.”

The European Commission itself has proposed greater unification of the continent’s telecommunications markets by harmonising regulation.

“The EU is still essentially a collection of 27 distinct national telecoms markets,” Neelie Kroes, vice president of the European Commission, wrote in a blog post in March. “That fragmentation has consequences.

“It means that customer choice, for both consumers and business users, is limited to what happens to be on offer locally – and that can vary a lot.”

According to Kroes, creating a single EU market in digital communications could boost its economy by up to €110 billion a year.

Schoener says the idea makes sense in principle, but wonders whether new regulation is either necessary or viable.

“I don’t know if they would have to go that far, or whether the network sharing type of deals that a lot of European telcos have been doing would be enough to get them back on their feet,” says Gartner’s Schoener.

“I would think there would be a national pushback on that idea,” she adds.

Obiodu agrees. “There is a risk that if the EU tried to do anything to unify the telecoms market, it would result in headlines in the Daily Mail or The Daily Telegraph saying that Europe wants to take our spectrum fees,” he says. “That would just kill anything that tried to get off the ground.”