Women in IT Awards winners revealed at glitzy ceremony 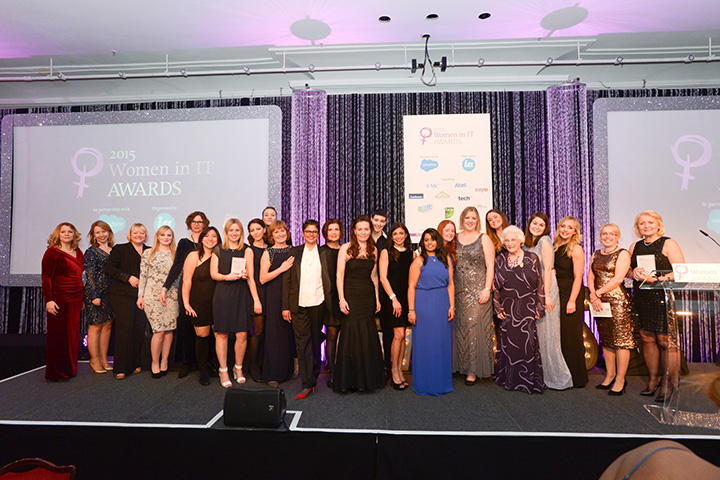 The achievements of women in technology were celebrated this evening in front of 500 of the UK’s most prominent IT leaders.

The winners of the inaugural Women in IT Awards, organised by Information Age in partnership with Salesforce.com to tackle the industry’s gender imbalance, were revealed at the Grosvenor House Ballroom on London’s Park Lane.

World War II veteran Betty Webb, who was a special guest representing the thousands of code-breaking women who cracked Nazi Germany’s Enigma and Lorenz ciphers, received a warm standing ovation by the audience.

Having gathered resounding support from trade associations, politicians and companies of all sizes and sectors, the event has emerged as the largest and most prominent women-in-technology initiative in the UK.

According to a recent study from employer body The Tech Partnership, which supported the event, just 16% of the IT industry is made up of women and the gender gap is worsening.

One report found that tech companies with women on management teams have a 34% higher return on investment, while another predicted that increasing the number of women working in IT could generate an extra £2.6 billion a year for the UK economy.

Through a series of 12 awards, the Awards highlighted the tremendous value that women can bring to IT roles and identified much-need role models for girls, who make up just 18% of students on UK computing degrees, according to results from an Information Age freedom-of-information request.

The UK’s biggest professional bodies for the IT industry also supported the event – including BCS – The Chartered Institute for IT and trade association techUK – while The Guardian assumed the position of official media partner.

Nicky Morgan, the Secretary of State for Education and Minister for Women and Equalities, who is supporting the Your Life campaign to encourage more young people, and especially girls, to pursue careers in booming areas like technology, lent her congratulations to the finalists.

“Well done to all of the women who have been nominated for the Women in IT Awards,” she said. “You are all fantastic role models and ambassadors for young people looking to study STEM subjects.

“I am sure you will inspire other women to follow in your foot steps and pursue a career in technology.”

Rossi added: “We would like to congratulate not only the winners but everyone who nominated, sponsored and supported the Women in IT Awards – it was a truly special night for all involved.

“There is no easy fix to overcoming technology’s gender imbalance, but by bringing together so many talented and influential people, highlighting new role models and mentors, and showing what an exciting industry it can be, we can significantly contribute towards a more diverse workforce.”

Further insight into how each award was chosen by the judges, as well as reaction from the winners, will be revealed in the February issue of Information Age magazine.

ADVOCATE OF THE YEAR – sponsored by TeenTech

INNOVATOR OF THE YEAR – sponsored by Informed Solutions

BUSINESS LEADER OF THE YEAR – sponsored by Zayo

PUBLIC SECTOR DEPLOYMENT OF THE YEAR

PRIVATE SECTOR DEPLOYMENT OF THE YEAR

SECURITY CHAMPION OF THE YEAR

FUTURE CIO OF THE YEAR – sponsored by Software AG

IT TRANSFORMATION OF THE YEAR

CIO OF THE YEAR – sponsored by EMC

WOMAN OF THE YEAR – sponsored by Salesforce.com