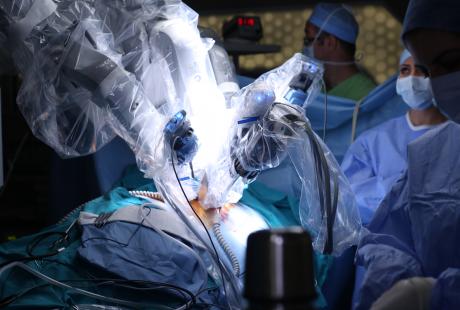 Robotics, or artificial intelligence (AI), instead of a looming threat to destroy mankind, will actually advance the human race.

AI will extend the capabilities of humans. It will allow us to focus on more worthwhile pursuits.

The latest example of machines lending a hand to human endeavour has come from the John Radcliffe hospital in Oxford.

Here, Professor Robert MacLaren performed a world first by conducting a robotic operation inside an eye.

The patient had membrane growing on the surface of his retina, which was about a 100th of a millimeter thick and needed to be dissected off the retina without damaging it.”

This would not have been possible with a human hand, and the success of the operation means operations like there could be revolutionised – by integrating robotics.

MacLaren told the Guardian “the things we see are beyond the physiological limit of what the human hand can operate on.”

The Preceyes surgical robot allows the surgeon to use a joystick to guide a thin needle into the eye.

The robot acts like a mechanical, methodical hand, and is able to filter out hand tremors from the surgeon.

It is collaborative, effective, and revolutionary.

Robot assisted surgery is common but it has never been used inside an eye, and shows how the range of practical capabilities robotics offers, to the medical sector alone.

>See also: Do the benefits of robotics outweigh the heavy demands on infrastructure?

Looking to the future of robotics technology in medicine, specifically eye surgery MacLaren said: “There is no doubt in my mind that we have just witnessed a vision of eye surgery in the future.”

“I hope the robot will allow us to do new more complex and delicate operations that are impossible with the human hand.”

Here he is referring to retinal gene therapy, which could cure blindness, but cannot be done by human hand.

As robotics technology becomes more advanced, and accepted, its applications for the health sector will expand beyond the hospital.

Maarten Beelen from Preceyes said: “In the future we could see this being used in an office based setting, where only the robot would touch the eye and it would be fully automated, which would improve efficiency and reduce costs.”