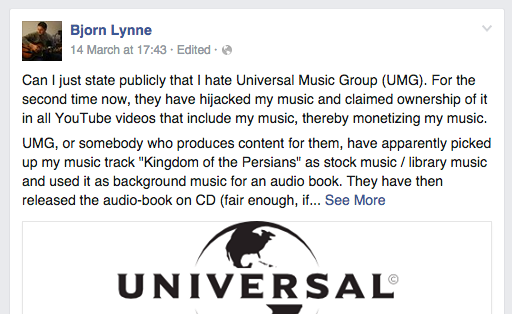 YouTube introduced ContentID in 2007 to help copyright holders monetise unauthorised use of their material.

More than 5,000 copyright holders participate in the programme, which scans videos against its database to detect infringements.

If an infringement occurs, the copyright holder is alerted and can decide whether YouTube removes the video or monetises it with advertisements.

>See also: The ‘rampant fraud’ of Amazon sellers exposed – and is an Amazon employee one of the culprits?

However, Bjorn Lynne, an independent artist in Norway, found his music taken over by UMG-enforced advertising despite it not being owned by the corporation.

In one example, UMG owns the rights to an audiobook that paid Lynne a license fee to use his song Kingdom of the Persians as background music, he claimed.

The audiobook was entered into YouTube’s Content-ID system, which detected Lynne’s track as a match and then followed UMG’s wishes to place advertising on the video. This means UMG is paid every time somebody views the video.

Lynne hit out at the media giant and Google-owned website on Saturday after his appeal was rejected.

“One thing would have been to have done this unwittingly, by mistake,” he wrote on his Facebook page. “But I have ‘disputed’ the claim on YouTube, written an explanation and told them about the origins of this music — then waited the full 30 days that the claimant has to process the dispute, only to be told that UMG have reviewed the dispute and upheld their claim!”

The Financial Time reported in October that since launching the ContentID programme YouTube had paid out $1 billion to copyright holders, turning the previously troublesome issue of unauthorised online uses of music into a significant revenue stream.

However, it has come under heavy criticism for weighting the appeals process towards the copyright holder, often leaving people with no other option than expensive legal action that many can’t afford.

“The only reasonable thing to do here, for me, would be to hire a top lawyer to go after them legally,” he said. “But realistically, it’s like $350 per hour for a lawyer and a 3 hour minimum for a case, so I’m looking at over $1,000 just to get something started.

“I feel powerless and I’m left to watch my music being r***d by a media giant, who sits behind closed curtains, ignores the rightful owner of the music and just goes ‘Nah, we’ll take it anyway’. Screw you, Universal Music Group!”