Inside the “hive-mind”: how AI-powered drone “swarms” can benefit society 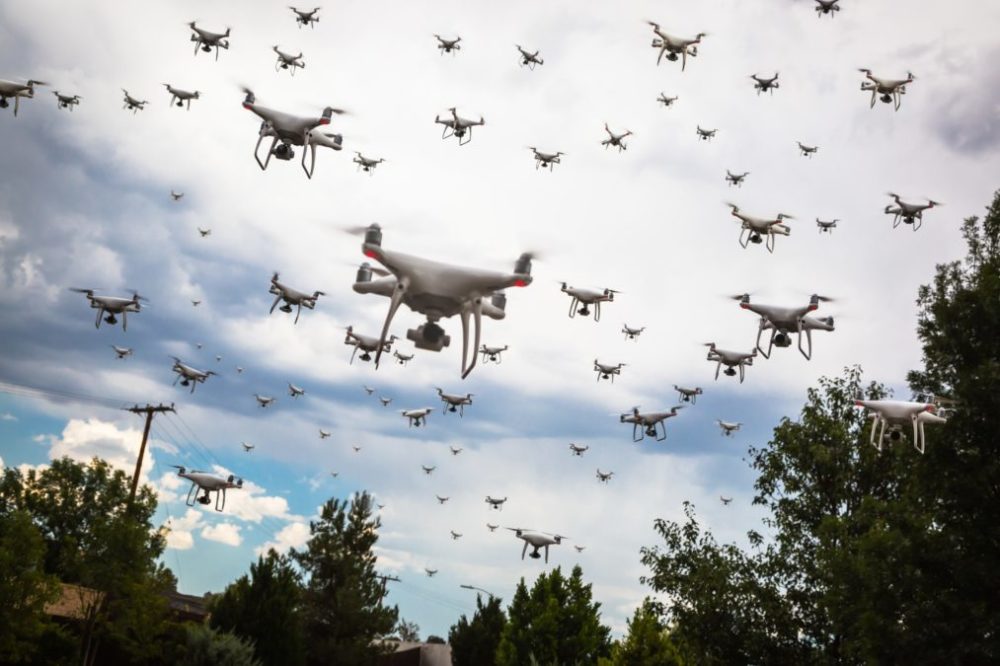 There has been a lot of hype recently around emerging technologies from the Internet of Things to artificial intelligence, blockchain and fog computing. Typically, we tend to look at them as independent domains or even markets. Topics such as exploding AI’s market size, billions of IoT devices getting connected, dozens of new blockchain use-cases, and the cloud vs. fog debate have been dominating headlines. However, I would recommend that instead of such a technology siloed view, organisations think of these technologies as tools that should be integrated together.

Combined, IoT, AI, blockchain and fog computing are not only improving existing processes but are already starting to transform industries, and create new data-driven business models and revenue streams. Each of these four technologies have a specific role to play. For example, enterprises can connect thousands of sensors and actuators to capture the data such IoT devices generate. Meanwhile, to enable real-time processing of this data, fog computing can extend cloud capabilities closer to the data sources, whether on an oil-rig or in a self-driving vehicle. AI inference engines deployed locally can in turn analyse that data and make instantaneous decisions based on it. And finally, blockchain can record all of the transactions in a distributed ledger, serving as a single source of trust across such systems.

As I was thinking about the convergence of these technologies, it occurred to me that drones can serve as a great example to illustrate this union in action. Drone implementations have gone through several phases: first, as an individual flying machine capturing visuals or information that is uploaded and processed after the mission is completed; second, a drone that transmits alerts, exceptions or decisions during its mission in real-time to the cloud based on the data it captured; and third, as a swarm of drones operating like a superorganism or a “hive-mind,” making real-time decisions together and communicating both with each other and the cloud. The last phase is only possible through the convergence of the IoT, AI, fog computing and blockchain.

Businesses across many industries today are exploring the use of drones. In logistics, transportation and retail, companies are using them to increase efficiency in their supply chains, deliver goods and solve the “last mile” problem in e-commerce delivery. In other industries, they are being used to survey open-pit mines, conduct inspections on critical infrastructure and utilities, or monitor crops across large swaths of agricultural land. In each of these use cases, the drones have traditionally been remotely-piloted and operated as individual flying machines. They are often equipped with a variety of sensors used to capture data that is downloaded and analysed after the drone has landed. While these use cases provide great value to businesses, we’re beginning to see businesses move toward the next step in the evolution of drones.

Commercial drones: the business opportunities they present and why their success is reliant upon trusted data

The next step has primarily been enabled through the rise of fog computing. This model involves drones flown autonomously and transmitting only relevant data for analysis in real-time. Rather than waiting for the drone to land to download the data it captured, businesses are able to pre-program drones with specific flight plans, allowing them to fly autonomously. As they fly, their IoT-enabled sensors feed data to the fog node on board for processing and analysis and only the exceptions or alerts are transmitted to the cloud. Thus, drones can be now used in applications where time is of the essence, and real-time insights are critical. For example, in the event of a flood, first responders could send a drone into a flood zone to look for stranded survivors. Each drone would be pre-programmed to fly over their designated patch of the flooded area, reporting back sightings of stranded people or animals in real-time. The data can then be “stitched” together and analysed at a central location so emergency response teams can create the optimal evacuation plan.

A swarm of drones acting collectively

The third model that is beginning to emerge, and which I find most intriguing, is where we see multiple drones acting in unison and communicating horizontally with each other, to the degree that they actually begin to form a singular, virtual entity.

As an analogy, highly social insects such as honeybees, ants and termites are known to communicate so effectively with each other that their massive colonies begin to form a superorganism, appearing to think and act together as one entity toward a common goal. Through the convergence of the IoT, AI, fog computing and blockchain, a swarm of drones can also communicate and make real-time decisions together much like a superorganism.

EXCLUSIVE: The drone industry through the eyes of its regulator – the Civil Aviation Authority

Media headlines surrounding the rise of drones are often negative, but the potential for them to transform industries is difficult to deny

For example, in the event of a wildfire, firefighting agencies could send a swarm of drones into the area. Communicating with each other, the drones can share notes as they survey the area and make intelligent decisions on where to drop fire retardant for the greatest impact, based on a multitude of conditions and datasets captured by their IoT-enabled sensors. These conditions could include wind direction and speed, temperature, or the percentage of fire contained, providing a three-dimensional understanding of the topography and where firefighters are currently located. Sharing all of this information across 50 or 100 drones, the swarm can examine the problem from a big picture perspective, making more intelligent and comprehensive decisions in real-time.

The idea of a swarm of drones acting as a collective “hive-mind” through the convergence of the IoT, AI, fog computing and blockchain may seem a bit futuristic, but it is quickly becoming a reality. And though some people may worry about the potentially harmful applications of such systems, I prefer to focus on the many ways these technologies can benefit us. Drones are just one example of the ways that the IoT, AI, fog computing and blockchain can be used together to benefit us as humans and society and I, for one, can’t wait to see what other innovative applications emerge.