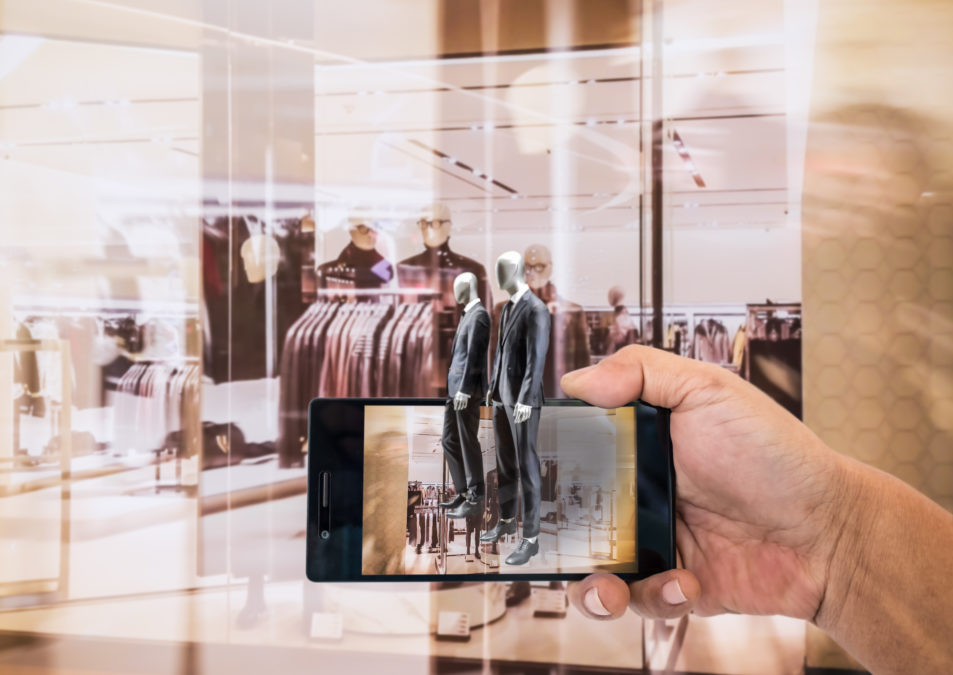 Traditional retail has got problems — this is hardly a revelation, it faces threats on multiple fronts, but augmented reality shopping might make all the difference, giving the whole business of going out to shop a new raison d’être. And according to Simon Wright, director of AR and VR futures, Genesys, the conditions that are required to enable this to happen are just beginning to emerge.

A good metaphor for what could be about to happen relates to super cold water. There is a mistaken view that water freezes at zero degrees centigrade. In fact this is not so: ice melts when temperatures rise above zero, but if the conditions are right, water can remain in its liquid form at temperatures right the way down to minus 48.3 degrees. But — and this is where the analogy with augmented reality shopping, or indeed any disruptive technology, applies — once super cool water begins to freeze it turns to ice immediately. One moment a pool of liquid water, the next, totally frozen.

When the technology is right, when the conditions are right, a potentially disruptive technology can go from hanging on in the wings, a nice idea but feeling ever so slightly like a whimsical concept from science fiction, to world changer, virtually over night.

The smart phone is a good example: before WiFi, before Moore’s Law had generated sufficiently powerful hardware at a mass market price, before the commoditisation of certain components, before battery power provided sufficient storage per dollar, they fell short. For customers, smart phones were cumbersome, always needed re-charging and were more user un-friendly than anything. But when the technology was aligned, and when a certain company with vision and design expertise embraced it, that company went from a niche producer of PCs to the largest company in the world. It didn’t happen overnight, but the transformation of the Apple in 1997 when Steve Jobs returned, to the Apple in 2007, was remarkable.

Smart cities and augmented reality: is it set to become a reality?

As the augmented reality market matures, Information Age looks at how immersive technology can help in the development of smart cities.

First off there is the hardware, or so he explained to Information Age — it is of sufficient power now to enable augmented reality to do the things that previously required too much processing power.

Second off, there is Apple and its latest version of iOS, after-all, Apple’s boss Tim Cook, has been waxing lyrical about augmented reality for some time.

Augmented reality is one of the most exciting technologies that made its way into the mass market in the recent years.

Third off, there is convergence with other technologies such as AI and chatbots.

Finally, there is a business need. Retail desperately needs a boost, and all that investment into call centres needs a new impetus.

How augmented reality is revolutionising the way people shop

Augmented reality is becoming more and more popular at home, and in retail to virtually try on makeup and soon, clothing

To that last point, augmented reality shopping solves a problem, and Simon believes that the main driver of a new technology is its ability to solve a problem.

“Consumers are getting more used to AR,” he said, and “like all innovations, it solves problems and right now there is a problem over the future of retail, so how can we leverage AI and call centres to help this?”

He goes further: For augmented reality “All the stars are aligning for something truly momentous.”

The holy grail of digital transformation, when dealing with customers, is trying to create the same — or as much as possible, the same — experience, whatever means they choose to engage with the company — be it online, via a telephone call to a call centre or in a physical store.

And Genesys has a vision for how the customer at home can start the process of buying a product — maybe prompted by a TV ad, or a magazine ad, engaging with a company, maybe via an avatar with technology provided by a company, such as Genesys, ascertaining the best communication method, person to person, chatbot, via a call back, or a synchronising messaging or maybe via online messaging.

Entering the new age: How augmented reality will transform travel, healthcare and construction

The point though is that a combination of technologies, in can step in.

And once the customer visits a store; he/she could swipe a card, or perhaps have their presence — after giving permission — detected by a sensor; and via either their smart phone, or in time augmented reality glasses, have a guide provide them with the information they need, telling them where a product is. Maybe they are looking for an item of furniture — so they can see it and touch it for real, but via augmented reality also see it their home, or in a different colour.

Simon says: “I can start an experience at home and carry that experience through retail stores in a seamless way, and have some of those online assets like contact centres, experts, and AI in the physical world next to me.

“I no longer have to choose between online and physical, I can do both at the same time. This is hugely exciting and game changing.”

These days Simon reckons people don’t want to hang about, wandering aimlessly in a shopping centre, they want to go straight to the product they want, and do something purposeful while a product is prepared. An avatar could organise a trip to the cinema, or put the young kids in a crèche or lunch, perhaps while an order is prepared.

Simon speculates that a shopping trolley could hold your smart phone, giving you tips and information and indeed paying for stuff as you shop.

Simon continued that we may have own personal avatar that knows us well, negotiates on our behalf with third parties, saving us that bother, all that repetition: name, address, password etcetera.

Then there is advertising!

“At the moment, ads are reactive, and while they are personalised they are annoying; they wait for you to do something first, for the ad to pop up.

“Imagine if they went via your avatar which sifts through them looking for relevant ones.

So the avatar only lets you see the ads it thinks you will find useful.

Simon speculates that our personal avatar might change from the appearance of butler to chef depending on what we are doing.

“It will have to be opt in” says Simon, but maybe if we have our personal avatar, it could safeguard our privacy.

And when will augmented reality shopping start changing the way we shop?

“We will start to see elements of this within the next three or four years.”