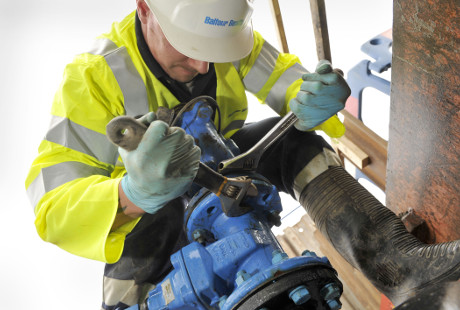 Founded over a century ago, Balfour Beatty is the UK's largest infrastructure construction company. It has built everything from the Channel Tunnel to the world's largest shopping centre, the Dubai Mall.

Unlike many of its rivals, the company has the facilities to manage an infrastructure project from cradle to grave: from finance, to construction, to ongoing management.

It achieved that breadth in part through acquisition, however, so until recently the company was siloed and inefficient. "We were essentially a federated business," explains Danny Reeves, CIO of the company's services division. "Even our individual units were federated businesses."

That meant a lot of inefficiency and duplication of effort. In the last few years, though, Balfour Beatty has been implementing a board-driven efficiency drive to remove duplication and promote collaboration across the business.

Two and half years ago, the company set up a shared services unit, called Work Smart, to unite all of its HR and finance processing functions.

At first, IT stayed out of Work Smart. "That was too much change to absorb in one go," explains Reeves.

But IT was ripe for optimisation: individual units operated their own infrastructure and their own systems. Not only did this cost too much, it also hinder collaboration across the business.

In 2011, work began on Balfour Beatty's shared IT services strategy, led by Reeves. "The programme I'm responsible for is about making sure we can operate efficiently across our entire business: everything from how we share data, how we operate our IT services resource, right the way through to our back end infrastructure."

The aim? To cut annual IT costs by a quarter.

The initiative took a big step forward in June, when Balfour Beatty signed a five-year hosting and end-user computing engagement with IT services provider.

It will see Balfour Beatty's server estate move into Fujitsu's data centres. "We've got approximately 1,500 servers spread across the UK, in 10 data centres," Reeves explains. "Our first target is to cut that down to around 750."

Balfour Beatty has so far virtualised around 35% of its server estate, but hopes to extend that proportion to 80%.

As well as the hosting and end-user computing contract, Balfour Beatty is also engaging Fujitsu on a project basis for at least two other major programmes of work. The first is to construct an entirely new email infrastructure for the company, while the second is to rationalise its application portfolio.

"We currently have 5,500 applications across the estate, and we have a target to reduce that down to 1,500 over the next six to 8 months," Reeves says. "That will form the baseline, from which will continue to drive the number of applications into the 100s."

This rationalisation, he adds, will help Balfour Beatty reach its server virtualisation targets by simplifying its back-end infrastructure.

Reeves said he wanted to engage Fujitsu partly on a project basis to foster a culture of collaboration between the two companies.

"Engagements I've worked on in the past have become very contract-driven," he says. "We didn't want that type of relationship with Fujitsu and nor did they.

"By the nature of our scale and our breadth, we are a prime candidate for big data"
Danny Reeves
Balfour Beatty

"We agreed we would work on this on a partnership basis, which gave both sides the opportunity to suggest and develop the business case for additional benefits."

Indeed, culture was one of the reasons that Balfour Beatty selected Fujitsu for the contract. “They define their core values in very similar language to ours,” he says.

Another was the fact that Fujitsu is involved in a great number of infrastructure projects in the UK and many of the Balfour Beatty’s other markets. “That means we can leverage Fujitsu's experience of applying in the infrastructure market,” Reeves says.

Perhaps the biggest impact of the deal will be for Balfour Beatty’s IT staff. “We are going to retain around 100 people in our IT shared services function, and transfer around 67 over to Fujitsu under TUPE (Transfer of Undertakings (Protection of Employment) law)”.

“We believe that Fujitsu will offer those workers the best possible opportunity in terms of their own career development,” Reeves says.

There will remain some IT staff embedded in the business units, but only when there is some specialist system they need that cannot be folded into the shared services unit.

Balfour Beatty’s IT efficiency drive is not just about centralising and standardising IT equipment – it also about promoting collaboration and knowledge sharing across the organisation.

An important pillar of this objective is 360, a SharePoint based collaboration platform that Balfour Beatty implemented last year.

“360 has data-rich profiles on our employees, which means you can search on experience, on capability, on the projects they've worked on, on the companies they've worked with,” Reeves explains. “That means you can join up with those people, collaborate on projects, and share information and documents around those projects.”

The next horizon where Reeves plans to improve the collaboration within Balfour Beatty is around data.

“By the nature of our scale and our breadth, we are a prime candidate for big data,” he explains. “We have so much data based right across our asset base that we are thinking very carefully about the best way to apply big data principles to join that stuff up.”

The most concrete step in this direction so far has been Balfour Beatty’s commitment to building information modeling (BIM), the use of parametric data in building and design software to make construction projects more intelligent and more collaborative.

This has been driven in part by regulatory requirements – the UK government has said that all public sector construction contracts will be procured using BIM by 2016.

Balfour Beatty recently signed a new agreement with 3D design software vendor AutoDesk, designed in part to promote the use of BIM within the company.

“Part of the deal was a redesign of Autodesk architecture, so people can use the BIM product anywhere there are in the world and have access to the right parts of the data,” Reeves says.

“And Autodesk is also helping us develop our understanding of BIM, so we can make sure we are applying best practice across the company.”

With more and more clients demanding BIM documentation for their projects, this is an investment in the future, Reeves says. “It means we are protecting our order book, which at £16 billion is the strongest order book that Balfour Beatty has ever held.”