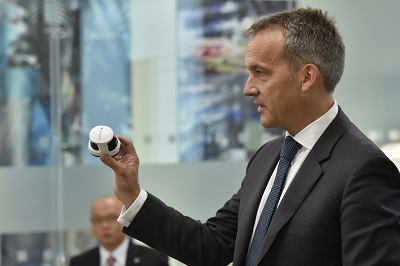 Barclays Bank is ramping up the fight against fraud with the launch of a new method of customer authentication, which has been developed with Hitachi’s finger-vein technology, VeinID.

The technology will be initially available to Barclays’ corporate banking clients from 2015. The compact device can read and verify the users’ unique vein patterns in the finger, helping to combat identity fraud experienced by UK businesses.

VeinID is recognised as one of the most secure biometrics in the market. Unlike finger prints, vein patterns are extremely difficult to spoof or replicate.

The scanned finger must be attached to a live human body in order for the veins in the finger to be authenticated. Barclays said it will not hold the user’s vein pattern and there will be no public record of it.

VeinID is already used by banks and ATM machines in Japan, North America and Europe for password replacement and single sign-on.

>See also: How Barclays is restoring banking trust with innovation

However, the combination of vein biometric and highly secure digital signature technology in the Barclays Biometric Reader is a first for the global financial sector.

There is future potential for it to be introduced more widely in UK branch networks, Barclays said.

The launch of the Barclays Biometric Reader follows on from the bank’s introduction of voice biometrics for its Barclays Wealth customers to identify themselves on phone calls, removing the need for passwords or security questions.

“This solution is at the leading edge of innovation and is in direct response to client concerns about the threat of online fraud while making our customers’ lives easier through its convenience,” said Ashok Vaswani, CEO Barclays Personal and Corporate Banking.