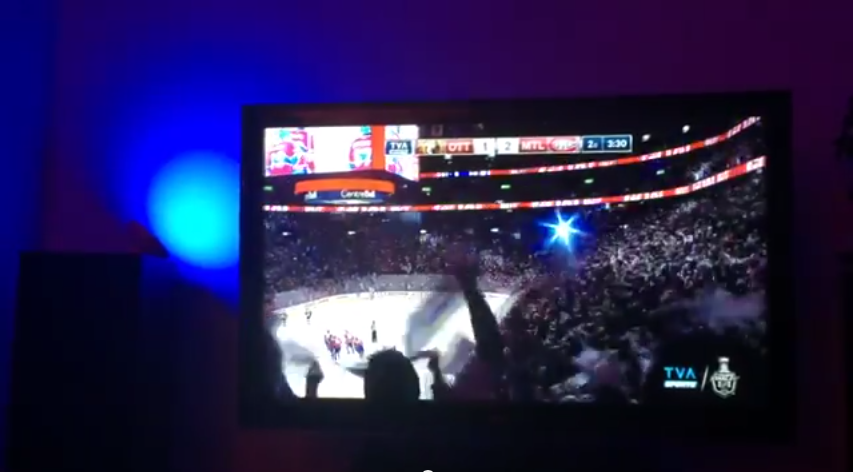 For sports fans, there’s no greater feeling than celebrating an important goal that your team has scored. Nothing beats that moment of losing yourself in the pure elation of victory.

One hockey fan, however, has taken this to a whole new level – transforming his living room into a light and music show every time his team hits the net.

>See also: Is machine learning about to go mainstream?

Montreal Canadiens fan François Maillet wanted to create a celebration sequence involving WiFi-enabled LED light bulbs and the Canadiens’s goal song, which he originally thought could be triggered by pushing a USB-connected button.

That would be cool enough, but Maillet realised his expertise as a computer scientist and head of machine learning at an artificial intelligence company could take the celebration a step further by having it triggered automatically.

‘I trained a machine-learning model to detect in real-time that a goal was just scored by the Montreal Canadiens based on the live audio feed of a game and to trigger a light show using Philips hues in my living room,’ he said.

Maillet extracted audio from the highlights posted on the Canadiens’ website, and created a heat map over the time and audio frequencies that occurred when goals were scored – particularly noting the patterns of the goal horn and commentator’s yell.

‘There is of course the goal horn, if the home team scores, but also the commentator who usually yells a very intense and passionate “GOOOAAAALLLLL!!!!!”,’ Maillet wrote on his blog.

Having identified the audio patterns that occur when a goal is scored, he still had to create a computer model that could give the right probabilities. That's where machine learning came in.

Machine learning is a technology that can process the data regularities of past events to accurately predict when something occurs again.

Maillet used a machine-learning model to detect when a goal occurs by processing the live audio feed of the game in real-time.

‘We could trigger the lights and music automatically, allowing all the spectators to dance and do celebratory chest-bumps without having to worry about pushing a button.’

But don’t just read about it, watch it here in all its glory.

And if anybody would live to replicate the epic celebration, Maillet has posted a full breakdown.