Skip to content
Home » Topics » Cybersecurity » Darktrace lists on the London Stock Exchange, with shares up 43%

Darktrace, listed under the ticker ‘DARK’, announced that shares were priced at 250p in its London IPO, with stakes initially changing hands at over 350p on the opening bell before settling at around 342p later in the morning.

It was said that Darktrace’s offering would comprise of around 66 million shares, approximately 9.6% of its issued shared capital, with a further 9.9 million shares planned to be sold if demand proves higher than expected.

The UK cyber security provider, founded in 2013, announced it would float on the London Stock Exchange earlier this month, following a surge in revenue to almost $200 million during the pandemic, with most of it coming from subscriptions.

“Our company is deeply rooted in the UK’s tradition of scientific and mathematic research, so we are especially proud to be listing on the London Stock Exchange,” said Darktrace CEO Poppy Gustafsson.

“To our world-class inventors at our R&D centre in Cambridge, today is really about celebrating you. Not only have you created a fundamental technology that 4,700 organisations now rely on to help them tackle novel and advanced cyber threats, but you remain committed to innovation, pushing the envelope and shaping the world with your ideas. Today is just the beginning.”

The financial surge for Darktrace displayed renewed faith in UK startup IPOs, with investors looking past the recent plunge in share price for Deliveroo during the food delivery company’s float. 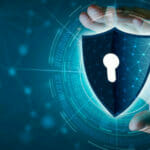 The cyber security mesh: how security paradigms are shifting

Alex Baxendale, vice-president consulting expert at CGI, discusses the rise of the cyber security mesh, and how the paradigms of cyber security have shifted. Read here

An opportunity for global prominence

Following the listing of Darktrace on the London Stock Exchange, Russ Shaw CBE, founder of Tech London Advocates and Global Tech Advocates, expressed belief that its stock market debut can “boost the credentials of the Stock Exchange and position London as a prominent post-Brexit tech hub”.

Shaw said: “Just as the Lord Hill Review voiced London’s aspirations to become a world-leading listings destination, Deliveroo’s underwhelming stock market debut will have done the City no favours in achieving this goal.

“The spectre of this disappointing flotation will no doubt have been a concern Darktrace, but there are many reasons to be optimistic about today’s IPO given the early jump in share price.

“With two of the country’s largest tech firms now having committed to London, UK tech has set a strong precedent for others to follow, whether from our pool of domestic scale-ups or from overseas.”

Prosperity for the NDR space

“The segment grew at 24% CAGR in 2020, and according to IDC the leading vendors are outpacing that growth.

“Recent high-profile attacks, including the SolarWinds vulnerability and the $50 million Acer ransomware demand, have put the spotlight firmly on NDR players, which have proven uniquely adept at detecting and investigating this type of advanced threat activity.

“As with any first IPO in a given market, the Darktrace IPO affirms the market opportunity. They may be the first, but mark my words, they won’t be the last.”