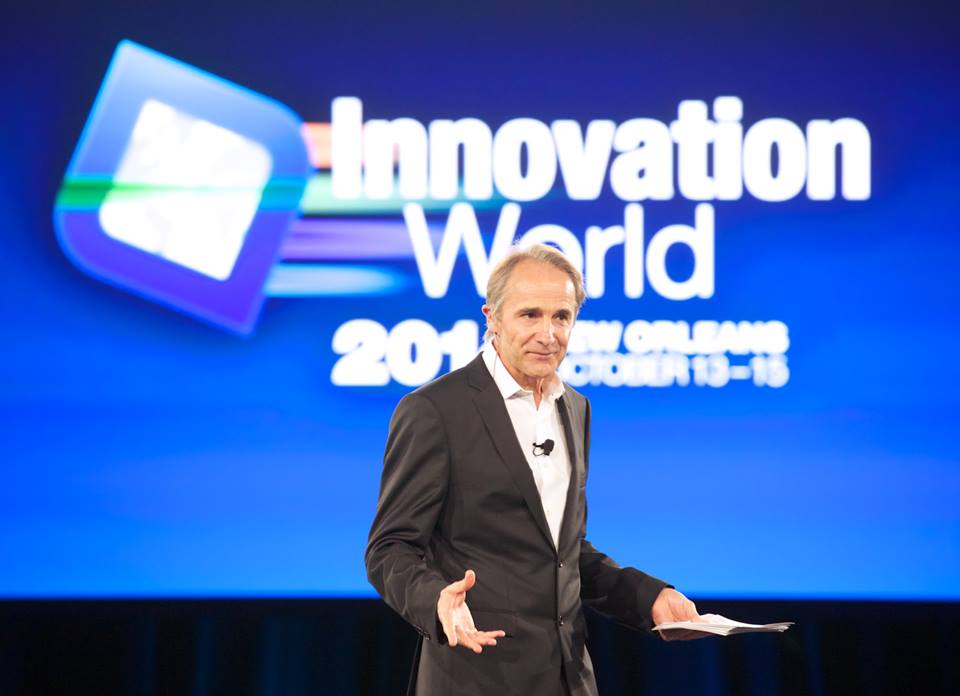 The software vendor market is a lot like natural selection- in the constantly shifting landscape of enterprise technology it's a matter of 'survival of the fittest' and 'evolve or die.' As a result, some of the most interesting and ambitious players are the ones who have been to the brink of extinction and had to fight tooth and nail to stay in the game. German vendor Software AG may well be one of them and if its recent company conference, Innovation World in New Orleans was anything to go by, it's firmly established itself back in the pecking order.

When current CEO Karl-Heinz Streibich took over in 2003, the company's bread and butter had been its mainframe database since it appeared on the scene in 1969, but like so many others it was floundering in the emerging environment of virtualisation and the cloud. After a difficult transition period in which it saw net losses of 9.3 million euros in the first quarter of that year, Streibich had successfully steered the company back to profit a year later, through an intense focus on innovating around its Business Process Management (BPM) business line.

Now Software AG turns over more than a billion euros and is Germany's largest software vendor next to SAP. BPM is its biggest earner, accounting for around 60% of the company's revenue, projected to reach 80% by 2018.

As well as some major changes to internal structure and the expansion of the Software AG partner ecosystem, Streibich oversaw the acquisition of several key additions to the Service-Oriented Architecture (SOA) arsenal including the webMethods BPM suite in 2007. This was complemented by multiple buys such as in-memory platform Terracotta in 2011, and Complex Event Processing (CEP) platform Apama Streaming Analytics in 2013, as well as several other investments in the analytics space. It also got portfolio and project management pinned down with its Alfabet acquisition last year.

Forrester identified 52 vendors in 2013, making it a crowded marketplace. A few years ago many were wondering how Software AG would level itself against mega vendors in the space such as Oracle and IBM. But although still quietly modest in its marketing, it has a loyal enterprise customer base that includes 70% of the Global 1,000 companies, and has proven itself hugely competitive as a 'middleware hub' building on more than 35 years' experience in good, solidly reliable German-engineered mainframe computing to take on the integration challenge.

It's fair to say Software AG has methodically transformed itself from its German and mainframe roots to a global integration player with a comprehensive, functionally rich suite for the digital enterprise.

Though a few years ago it might have been accused of not yet being capable of the kind of product integration that larger players like IBM could offer, its plan for total integration of its suite into customers' hybrid environments is now coming into sharp focus, as it demonstrated to some of its 10,000 customers in New Orleans in October.

'The interoperability of enterprise systems both on premise and in the cloud is becoming crucial as complexity of IT grows, and apps, data, SaaS and on-premise products all have to work seamlessly,' said Streibich, explaining Software AG'S vision for the 'connected enterprise' in his keynote speech.

Now that it's successfully crossed the bridge to the cloud, Streibich says his company is positioning itself ahead of the cloud's next phase, aimed at the creation of business applications in a flexible way. It's building this on the back of the 'Oreo cookie theory'- the idea that it's what's in the middle that counts, and an update to the notion that middleware should be rigid and fixed.

According to Streibich, the journey to this new phase started decades ago with standardised applications, then the cloud.'All that standardisation makes things reliable and is wonderful but companies must have the means to differentiate from the competition,' he explained. 'We need the new layer for differentiation, a middleware layer containing all the different functions for fast agile application provision.'

'We asked ourselves what it is we can do to add value for customers' projects, and what we hear is that companies rely on technology-driven innovation in their new business models. The core challenge of this is that connectivity has to be present whenever and wherever it's needed, and the siloed function of applications is very often the source of all problems.'

He hopes to address this with the launch of new integration platform as a service (iPaaS) webMethods Integration Cloud to provide cloud, on premise and hybrid integration capabilities, along with streaming analytics from Apama allowing users to gain insights from business events in real time.

As CTO Wolfram Jost explained at the event, the company is setting itself up as an integration partner for the kinds of 'wide and deep' scenarios that the emerging Internet of Things environment will demand.

'We are fast moving from a traditional business intelligence approach to a world where you can adjust your business by making continuous decisions,' he said. 'You can't make the mistake of thinking the Internet of Things is just about an injection platform taking data in from sensors and 'things' and putting it somewhere else. Companies using streaming data to optimise their businesses are already doing a lot of exciting stuff that is helping them seize revenue opportunies and identify problems in real-time. When it comes to creating consumer-facing apps they will become contextual across locations and devices, so consumers will demand the kind of customised experiences that comes from real-time analytics.'

'The world of the IoT going to take a completely new software architecture that can handle the scale, and we think our suite is positioned to provide that.'