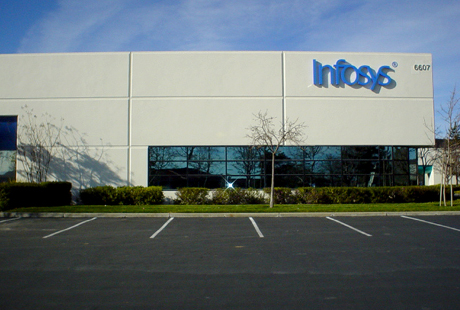 A huge black pyramid; a replica of the Colosseum; scores of sleek office blocks of abstract steel and glass design: the ostentatious buildings dotted around the Bangalore and Mysore campus sites of Infosys, the ‘tier 1’ Indian outsourcing provider, are monuments to the company’s global success. And the profile of the Silicon Valley-meets-Las Vegas architecture has even greater impact given the abject poverty that can be found on the streets just metres away.

All this has been achieved in a very short time. Although founded in 1981, Infosys’s explosive growth began in earnest with the liberalisation of the Indian economy in 1991. That year, its revenues were $2 million. In the financial year ending March 2008, they were $4.2 billion, roughly a quarter of which was net profit.

That the company has packed what would be for most companies a lifetime’s achievement into less than two decades is demonstrated in its ‘Heritage Centre’, a building at the centre of its headquarters site that is fondly spoken of in nostalgic terms. It was erected in 1994.

But this rapid success does not mean Infosys has an inflated sense of its own achievement. “Globally, we are still a small company, and a lucky company,” admits Aditya Nath Jha, worldwide head of branding.

Nor does it assume that this success will necessarily continue for ever. “Our challenge today,” says Jha “is to try and build a company that lasts for 200 years.”

In this regard, Infosys is typical of the top-tier Indian outsourcers. The industry has seen phenomenal expansion in the past decade. But after the rush by Western companies to leverage India’s huge pool of low-cost IT skills over this period, the success of Indian companies over the next decade will depend on how well they move up the ‘engagement ladder’.

Each of the many thousands of young graduates that join the ranks of Infosys each year represents the company in microcosm.

They are hardworking, diligent, technically adept and highly enthusiastic – for many, the job represents an opportunity for a far more prosperous life than that of their parents. And there is plenty of work for these young software engineers to do.

However, the company has a pressing strategic need for a new kind of employee – business-savvy consultants who can speak to their clients’ decision-makers, not just their IT departments.

Whether these young graduates have it in them to fill that role – on the vast scale that Infosys requires – is the key question for the company right now.

As competition from lower-cost outsourcing destinations such as the and intensifies, the Indian outsourcers are in danger of having to take their own medicine. To avoid being undercut, they believe, they must provide higher-value services. Not only is this an opportunity to charge more money, it is also a way to improve the value for money they can offer and the depth of the partnership with clients.

“If you can be involved with the customer at the ‘solutionising’ phase (when project requirements are first brainstormed), you can have more say in the eventual design of the final system,” explains Anand Radhakrishnan, head of strategic platforms for Infosys BPO, the company’s business process outsourcing division. “Otherwise you may end up having to support a brittle system.”

In many ways, Infosys suffers a classic case of the innovator’s dilemma in this regard.

In order to build an organisation with the scale to meet global demand in such a small amount of time, the company has developed recruiting and training processes that are positively industrial.

The company receives around 1.5 million job applications each year. In 2007, it hired 15,200 people net. Each graduate entrant is assigned to one of Infosys’s six vertical industry business units (IBUs) and enrolled on a training programme that continues throughout their employment.

Infosys cannot slow these processes down – it is still competing on staff numbers and price. And as Nandita Gurjar, Infosys’s head of human resources, explains, “Staff attrition is the biggest problem facing today.”

But those processes were not designed to produce consultants of the calibre Infosys now needs if it is to move to the next level of IT services partnership.

For NR Narayana Murthy, the patriarchal co-founder of Infosys and guru of globalisation, the solution lies in fostering a culture of leadership within the organisation.

“Our biggest challenge is making sure that the tired minds that go home at the end of the day return the next morning invigorated and passionate about their work,” he says. “A good leader has the power to raise the aspirations of their workers.”

In his new role as chief mentor, the former CEO sits at the top of a mentoring programme designed to cultivate leadership. Like many other aspects of the Infosys corporate culture, the scheme quite deliberately resembles university life.

However, there are only 585 individuals currently being groomed for leadership out of a total workforce of almost 100,000. This reveals just how bottom-heavy the company is, as does the average employee age of 25.

Another solution is to look abroad. The company started hiring consultants in the US a few years ago and is now pursuing a similar scheme in Europe. Rumours that Infosys or one its peers are about to acquire a US or European IT services consultancy are in constant circulation, and some will probably turn out to be true in the near future.

But unfortunately for Infosys and its ilk, they are swimming against the economic tide – it is relatively more expensive for them to hire in or than a Western company like IBM or Accenture to hire in or Chennai.

Some observers are pessimistic about the ability of Infosys and its peers to become bona fide sources of innovation and consulting partners for Western businesses.

“They are never going to expand into the $80 to $100 per hour consultancy market – that’s wishful thinking,” says Sid Pai, an analyst for global outsourcing adviser TPI. Instead, Pai argues, those companies need to take their expertise of managing low-cost, scalable IT services out to local markets, where they can develop greater visibility and market understanding.

“Rather than making a diagonal shift of raising local presence and contract scope at the same time,” he says, “they need to be able to make a lateral shift and do what they do already but execute it locally.”

Infosys has come some way in adopting the global delivery model itself, having built or acquired local development practices from South America to Eastern Europe and South East Asia. But all are still dwarfed by its enormous Indian footprint.

with the customer. Although by far the greater part of its contracts follow the traditional application development services, infrastructure outsourcing or BPO models, Infosys has some more innovative engagements already under way.

The best-known example is the company’s Finacle banking solution, which it licenses as a traditional software package. But CEO Kris Gopalakrishnan plays down the significance of the Finacle division’s business model, arguing that it reflects the peccadilloes of the banking industry.

More innovative is a particular service that Infosys uses in its own on-campus shop in order to demonstrate innovative inventory management. The amount of stock on shelves is monitored using flat tracking devices that weigh the items on top of them. These devices connect to a system that monitors stock and warns a store manager when it is running low.

The devices themselves – already being used by some US retailers – are not so miraculous, but the way in which Infosys sells them is something of a departure for the company: the hardware comes free with the infrastructural support and development service. Such a ‘hardware-as-a-service’ offering represents a new route to market for Infosys.

This and many other examples of technological and business model innovation within Infosys are putting paid to preconceptions that Indian companies will never drive innovation. The company is clocking up a respectable number of internally developed patents.

But it is clear that Infosys has a burning desire to become more of a strategic business partner than a technology shop. “The race is on to become a next generation consulting partner,” Jha enthuses. He sees an opportunity equally open to the likes of Infosys as it is to IBM and Accenture.

And seizing that opportunity will require continued transformation of its human resources practices, so that they produce not just quantity and quality but also inventiveness and entrepreneurialism.

The company is doing all it can to evolve and effect that change, but it also depends on cultural changes occurring in India – changes that are far harder to predict and influence than technological developments.

Offshore 2.0 The first wave of offshore IT was all about lowering costs. Now organisations are looking to their sourcing partners for technology and business process innovation