The little snack box that built an empire on data 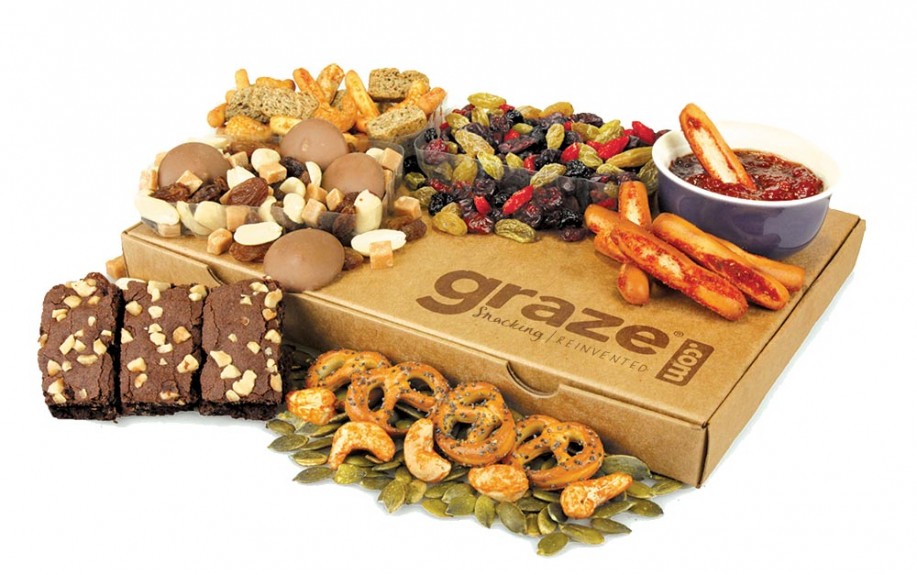 Back in 2007, Graham Bosher was working in a less-than inspiring industrial estate in Acton where he was building online film rental service LoveFilm.

Bored with the snack options in the office vending machine and with not much else around, he realised there must be better alternatives, and being ‘a bit of a techie’ began to muse on how technology could be used to create a much more differentiated product in the snack market. Recognising that technology hadn’t really been used to disrupt this industry, he set out to create a product with an exciting digital service aspect.

In 2008 he brought together the Graze team, conscripting co-founder and CTO Edd Read who was working as a freelance web developer at the time.

‘None of us had a particularly strong background in the food industry,’ says Read, ‘but we went about building Graze with the tech mindset that existed – commonly people refer to it nowadays as things like the lean startup mindset and all that kind of stuff – although those weren’t terms that were coined back then.’

Seven years later, and Graze delivers thousands of weekly or bi-weekly boxes of hand prepared nibbles through the post to customers on both sides of the Atlantic. With an emphasis on healthy eating and nutrition, the boxes are individually customised through the Graze website, so subscribers get a different selection of things to graze on each week, rating them as they go to refine their preferences.

With just over 150 full time employees, not including factory workers, across four sites, the company expanded into the US in November 2013 and had exceeded 100,000 customers by February 2014.

> See also: How the internet will ultimately save the high street, not kill it off

And this summer the company expanded into bricks-and-mortar shops for the first time after signing deals with Sainsbury’s, WHSmiths and Boots. Within weeks of entering the fast moving consumer goods (FMCG) market, Graze had become the number one selling healthy snack brand in WHSmiths. This kind of immediate success is virtually unheard of in the competitive world of FMCG.

‘I think the fact that we were able to use our online data and spot the trends emerging has allowed us to develop these products that have gone straight to bestseller in stores,’ says Read.

‘We always talked about the opportunities abroad and to get our snacks to customers through different mechanisms other than just the online service. We learned over time that this model we’ve built is actually an incredibly effective way to build up a food brand, so we have these advantages over traditional FMCGs that have meant we have been able to grow this product really easily.’

Read puts this down to Graze’s unique ability to build the brand off the back of customer data, collating information on which products customers like or not and swapping the product range up constantly to test what works and what doesn’t, delisting products and launching new ones.

As well as data from its website, Graze utilises a community of more than 150,000 people on Facebook to extend its customer influence, letting people tell the company whether a particular recipe should be launched or not.

‘This has allowed us to spot trends in the market,’ says Read, ‘so the ability to spot a trend quickly, develop a product to suit it, test it online and then ultimately find what works and push that into the retail channels is what makes us unique.’

Being able to target their market at speed and easily track the results has allowed Graze to cost effectively build its brand.

Back when they first started Graze, Read and Bosher knew that they wanted to build a fully integrated platform, connecting machines in the Graze factory and data from customers online to a centralised data warehouse to track things like efficiency of production lines and number of products to be repacked, so the whole supply chain can be based around late customisation.

‘It’s fair to say the tech is pretty bespoke to us because we have built something very intentionally from the beginning that didn’t exist in the market,’ says Read, ‘and there was no one else doing what we were trying to do in the food industry at the time. From this we’ve built a really data hungry culture at Graze.’

Initially building the centralised data warehouse on proprietary gear, over time the team moved bits and pieces to alternative providers as and when it became appropriate.

Now the company uses Amazon Redshift’s cloud data warehousing tool designed for big data analytics, with everyone in the business accessing it through business intelligence platform Tableau to quickly query sales, geographic location of customers and almost any other information, so operations can be streamlined and agile enough to adapt to customer demand on the fly.

Each Graze box is created and individually customised by hand, and a subscriber can change their mind right up until the box is packed and the system will work out if it needs to reallocate stock to them right until the box is picked.

Graze then used its agile approach to break into the U.S market in January 2012, first launching boxes from directly into the UK.

‘We quickly understood the way our consumers behave over there, and got some fascinating insights into taste profiles, the way they like to eat and the way they like to be targeted by marketing,’ says Read. ‘In a very lightweight way we internationalised the website in a few months, and within two weeks of launch we had a customer in every US state.’

Testing the waters in this way allowed the team to quickly build the confidence to invest in a team and factory in New York, and allowed it to become one of the most successful ever launches of a British food brand across the Atlantic. Within a year it had smashed its targets, reporting a run rate of $35 million (£23 million) per annum.

Looking ahead, the real challenge Graze has is to maintain its agile thinking, bringing it into the retail space in unprecedented ways.

‘The huge area is FMCS- this is where Graze is poised to do something really special,’ says Read. ‘There’s this really exciting culture building around data and an enormous unexplored territory in the world of the data we get back from FMCG.’