Microsoft shares up 8% on news of CEO Ballmer’s retirement 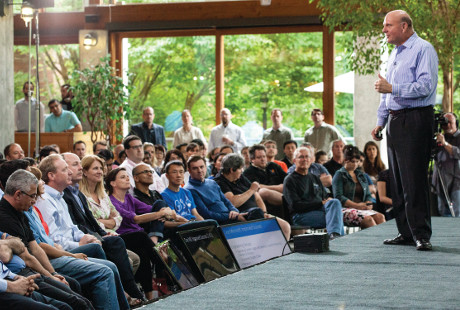 by Pete Swabey23 August 2013
Steve Ballmer has announced his intention to retire as CEO of Microsoft within a year.
Shares in the company rose over 8% following the news, suggesting that the market believes Microsoft will be better off without him.
The news comes just two months after Ballmer announced a strategic reorganisation of the company.
"Going forward, our strategy will focus on creating a family of devices and services for individuals and business that empower people around the globe, at home and on the go, for activities they value most," Ballmer said at the time.
In a statement today, Ballmer implied that a new CEO would be better placed than himself to effect that transformation.
"We need a CEO who will be here longer term for this new direction," he said.
Microsoft has appointed a special committee to find Ballmer's replacement, which includes founder and chairman Bill Gates.
“As a member of the succession planning committee, I’ll work closely with the other members of the board to identify a great new CEO,” Gates said in a statement. “We’re fortunate to have Steve in his role until the new CEO assumes these duties.”
Ballmer joined Microsoft in 1980, five years after the company was founded, as its first ever business manager.
He took over as CEO after Gates stepped down in 2006.