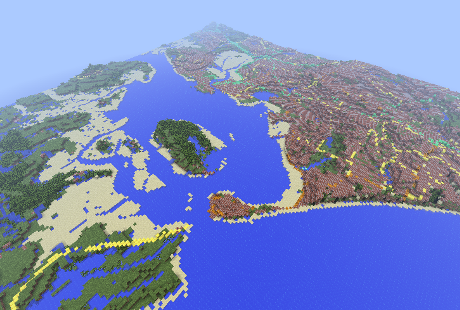 The Ordnance Survey (OS), Britain’s national mapping authority, has used its own open data to make an accurate 3D model of the UK within popular sandbox building game Minecraft.

The model represents 224,000 square kilometers (86,000 square miles) of the UK using 22 billion 3D blocks, each representing 50 metres of space in the real world. The Ordnance Survey believes it is the largest Minecraft world ever built on real-world data.

The team that built the model was led by an intern, Joseph Braybook. They used terrain data, such as the location of such as water features, woodland and roads, that is available for free through its OS OpenData products.

The model is connected to the Ordnance Survey's free Getamap service, allowing users to search the model and navigate to specific places. It can be downloaded by any of Minecraft’s 33 million players, who can build their own recreations of buildings or features on top of the landscape.

The convergence of new digital tools, and the growing impact of ‘gamification’, is highlighted in this exploration by the Ordnance Survey.

The Ordnance Survey says the model could be used in schools as a teaching aid, and demonstrates the possible uses for OS’s open data. “The … map shows the massive potential, not just for using Minecraft for computer technology and geography purposes in schools, but also the huge scope for applications for OS OpenData too,” said Graham Dunlop, Innovation Lab Manager at OS.

See also: Project aims to put the Internet of things into schools

In April, the organisation made various sets of mapping data freely available alongside its paid-for products, after various groups campaigned for its release.

Over the last three years, the Ordnance Survey has been rebuilding the OS MasterMap, its digital representation of everything in the country. It recently added what it calls the GeoSpatial Data Management System (GDMS), a data management layer that brings together all 450 million geographical features mapped across the UK.