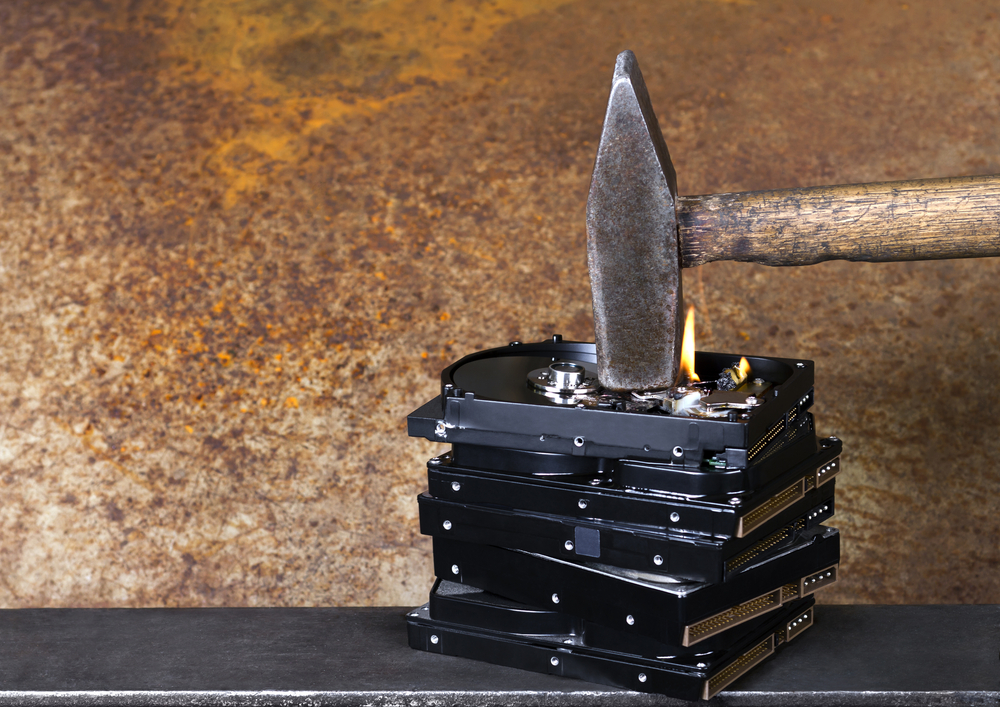 All data, whether it’s on hard disks, tape back-ups, mobile devices or stored in the cloud needs to be managed securely and compliantly – not just in storage and transit, but also at the end of its lifecycle.

Data destruction is important for everyone, from a home business user disposing of an old laptop at the local recycling centre, a consumer selling a smartphone on eBay, or a business transferring data as part of an upgrade programme. Just because data is deleted doesn’t mean it has disappeared from your drive and could still be restored by someone with the determination to find it.

While a consumer faces the risk of having personal information stolen, under Data Protection regulation companies have a legal obligation to destroy any sensitive information they’re no longer using.

And when the Data Protection Act is swapped for the more stringent EU General Data Protection Regulation in 2016, fines for acts of non-compliance will skyrocket – the new rules stipulate penalties of up to five per cent of a company’s annual turnover, or €100,000,000.

Yet in a recent study undertaken by Kroll Ontrack in partnership with data erasure experts Blancco with IT managers across Europe, we found that a quarter (25%) admitted to not having a process in place to deal with data destruction.

Not taking proactive action to permanently erase data can lead to catastrophe. Businesses as well as privacy-conscious consumers need to keep track of data assets that have come to the end of their lifecycle, and then destroy them at their origin. This might not sound like too complex a job – even someone with rudimentary knowledge of technology might be familiar, in theory if not in practice, with concepts like a disk format or factory reset.

Unfortunately, secure data destruction isn’t actually that simple. None of the above methods guarantee that the information stored on those devices won’t be recoverable.  In fact, it might take little more than a few minutes with a free software package to retrieve it.

The purpose of formatting a disk is to strip out its existing file system and generate a new one, not to securely and permanently erase sensitive information. The operating system might not be able to read it as normal, but it still exists. The common assumption is that the reformatting process wipes the medium clean, but that’s not actually true: most of the time, it leaves almost all of the data intact.

Although the process might seem different, carrying out a factory reset on a smartphone or other device with flash memory is identical to a conventional disk format – the contents of the chip stay right where they are, invisible to the operating system but recoverable nonetheless.

As the use of mobile devices grows more prevalent in the world of business, it’s evident that companies need to extend their secure data destruction practices beyond traditional hard drives and tape archives.

Even literally destroying hardware is no guarantee that the data contained therein will be unrecoverable. An intact hard drive is easy to transplant from one machine to another, for example, while even a shattered one can be reassembled and transcribed with enough effort.

So even though it may seem to be a last-ditch, fail-safe method, even taking a hammer to a hard drive won’t necessarily render sensitive information irretrievable. It means that for corporates in particular, there’s a need for even more secure techniques to ensure the destruction of end-of-life data.

Three of the most important of these techniques are outlined below:

Hard drives, flash storage devices and virtual environments can all be wiped without specialist hardware, and the software required ranges from free – such as the ‘shred’ command bundled with most Unix-like operating systems – to commercial products like Blancco 5.

> See also: Why backup and recovery needs to be strategic, not siloed

Data destruction applications use different techniques, but stick to a single principle to overwrite the information stored on the medium with something else. This may involve going over a hard drive sector by sector and swap every bit for a zero, or with randomly generated data. In order to ensure that no trace of the original magnetic pattern remains, this is typically done multiple times – common algorithms include Scheier seven-pass, as well as the even more rigorous, 35-pass Gutmann method.

A modern degausser, like the Ontrack Eraser Degausser 3.0, is basically a giant box that generates a powerful magnetic field, throwing a medium’s existing magnetic domains into disorder and rendering them unreadable.

Finally, physically destroying the media is an option, though as discussed above, this isn’t always as fail-safe a method as it seems. As Kroll Ontrack shows in this video, a hard drive can sustain significant damage before data is rendered irretrievable. In fact, even if the spinning platters inside are shattered, it’s theoretically possible that someone might put the parts back together and recover the contents.

Simply snapping a hard drive in half isn’t a suitable technique for permanently erasing end-of-life data. If a company goes down the physical destruction route, it should ensure that the media is shattered into as many pieces as possible – most professionals would recommend using a specialist hard drive shredder.