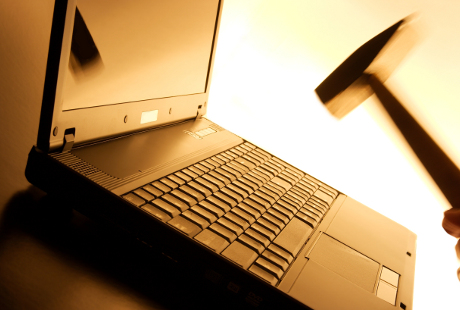 The Guardian first reported details of Internet surveillance by the US National Security Agency back in June.

Rusbridger wrote yesterday that after the story was reported, UK government officials demanded that he hand over or destroy any information relating to the story, which is based on leaks by former NSA IT contractor Edward Snowden.

"You've had your debate," one said. "There's no need to write any more."

Rusbridger asked the officials whether they would pursue the matter legally if he refused, which they said they would. Even after Rusbridger pointed out that The Guardian had copies of the data in offices all around the world, the government officials continued to demand its destruction.

This led to "one of the more bizarre moments in The Guardian's long history occurred – with two GCHQ security experts overseeing the destruction of hard drives in the Guardian's basement just to make sure there was nothing in the mangled bits of metal which could possibly be of any interest to passing Chinese agents".

"It felt like a peculiarly pointless piece of symbolism that understood nothing about the digital age," Rusbridger wrote.

The news follows the detention of David Miranda, partner of Guardian journalist Glenn Greenwald, at Heathrow airport for nine hours on Sunday.

Rusbridger wrote that neither the destruction of the hard drives nor Miranda's treatment would deter it from pursuing the NSA surveillance story.

“We will continue to do patient, painstaking reporting on the Snowden documents," he said. "We just won't do it in London."

Greenwald made similar remarks after Miranda's detention at Heathrow.

“If the UK and US governments believe that tactics like this are going to deter or intimidate us in any way from continuing to report aggressively on what these documents reveal, they are beyond deluded.

"If anything, it will have only the opposite effect: to embolden us even further.”