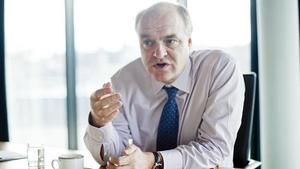 A veteran technology investor who made his name as an early backer of Amazon has dismissed cyber security as an industry that ‘puts people off e-commerce’.

The cyber security industry has grown alongside the rise in organisations – large and small around the world – being hit by damaging and high-profile data breaches.

While studies have found the vast majority of breaches are caused by either insider threats or external hackers exposing employee error, security companies often jump on such incidents to justify the need for their products.

>See also: The life and times of the cyber security hype curve

James Anderson, who has over £1.2 billion invested in global tech firms via his Scottish Mortgage Investment fund, told What Investment the tendency of the security industry to ‘scaremonger’ makes the investment opportunity ‘difficult to discern’.

‘[Because] the whole existing industrial complex is motivated to scare people, to put people off e-commerce, it is hard to know what the size of the market is,’ he said.

‘There are lots of products out there, but most people are better off putting their work into the cloud anyway, and that suits Amazon Web Services (AWS).

‘[AWS] is used by many large organisations – and if it is used by the Central Intelligence Agency (CIA), it is good enough for us.’

While Anderson admitted he does like a couple of IT security companies – Paul Alto Networks and FireEye – he doesn’t think the opportunity is large enough.

‘The thing is, cyber security is always likely to appear on the top line, the costs, of a business, rather than add to profits,’ he said.

Anderson was one of the earliest investors in Amazon. His initial £10 million investment in 2004 is now worth in excess of £400 million, and he intends to stick with the e-commerce giant.

‘Whenever we go to see [Amazon CEO] Jeff Bezos, we notice that he and the management team are not just resting on what they have,’ Anderson said, ‘they are constantly thinking about the next idea.

‘They think they are at least seven years ahead of their rivals, and however clever we think we are, we can’t keep up with them.’