We’re the Amazon Web Services of the Internet of Things, says Xively 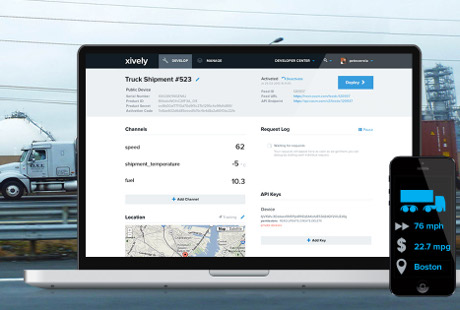 Described by founder Usman Haque as "a bit like Twitter for machines," Pachube had risen to prominence during the 2011 Japanese earthquakes, when citizens used it to map and integrate radiation readings data from their own geiger counters.

It was peculiar acquisition for LogMeIn, which did not seems like an obvious candidate to capitalise on the "Internet of things". Haque said at the time that LogMeIn had a proven track record of selling complicated technology to consumers.

Since the deal, Pachube has changed its name to Cosm – in part, at least, because no-one could pronounce its original moniker. It has continued to be a free service and although it attracted some commercial customers, such as smart meter vendor CurrentCost, it is still used predominantly by hobbyists.

This week, though, LogMeIn revealed its plan to unlock the platform's economic potential.

It has changed the name again, apparently due to copyright issues. The platform is now known as Xively (pronounced Zively).

More importantly, it has introduced a paid-for version for businesses that want to use the platform as a back-end for their Internet-connected products.

According to Chad Jones, VP of product strategy for Xively, the move follows growing interest in a commercial service. "We get up to 15 enquiries a week, and we've done no marketing," he says.

Businesses can now pay $999 for an annual license to use the platform, plus between $1 and $3 per connected device, depending on how much data each "thing" produces.

In return, they receive a service-level agreement with financial "ramifications" for the customer if it is not met.

The main attraction for businesses, Jones argues, is that they can get the data back-end for the connected devices up and running within hours. "We are going to do what Amazon Web Services has done, but for the Internet of things," he says.

One company that has already signed up for the paid-for systems is a US firm that manufacturers fair ground attractions. It wanted to embed a connected sensor in of its mechanical games, and at first consider building its own cloud-based, open source infrastructure. "They estimated that it would take 9 months to build, but after 6 weeks, their IT guy came across us," Jones claims. "He got the system up and running in two days."

Jones would not be drawn on how fast he expects the Xively business to grow, or how significant it will be for LogMeIn, but he is confident it will be a money spinner.

“According to Cisco, the Internet of things is a $1.2 trillion market,” he says. “We’ll make our money.”