When print and online collide: Inside The Economists digital strategy 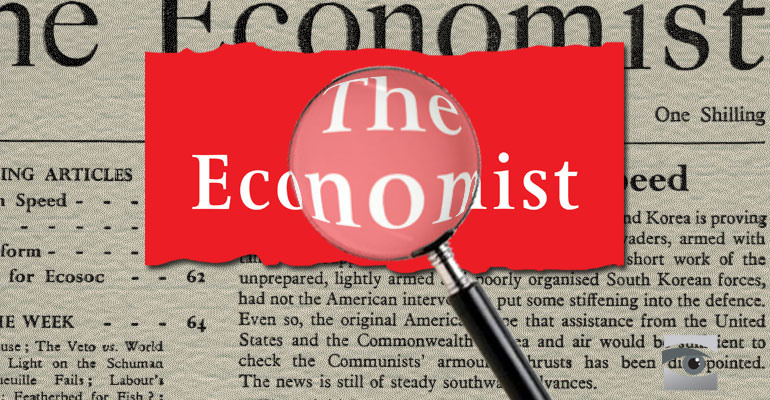 Not since the industrial revolution have more business sectors faced such radical change, but few have dealt with a bigger disruption in the wake of digital technologies than the publishing industry.

Thanks to digital media, the dissemination of news and knowledge will never be the same again, and the last decade reads like one long obituary of newspapers and magazines that have shut off their print production for good.

In the UK we said goodbye to The Independent and The Independent on Sunday as they were forced to bank on pixels over ink, while The Guardian continues to make a loss with revenues from online unable to catch up to lost print sales.

But despite all this, 173-year-old current affairs magazine The Economist is breaking the mould – its print circulation, far from dying, is up 5% and global revenues are £330 million.

Subrata Mukherjee, The Economist’s VP of product, says that its resilience has been down to getting the balance right between embracing new technologies and understanding how to sell people a print product they truly value.

‘We don’t want to say to our customers that print is dead and digital is the new thing, because we don’t want to be distracted by that message,’ says Mukherjee. ‘Wherever the customer wants us, we’ll be there the best we can.

‘We’ve done focus groups with our readers, many of them in universities, and they have said they prefer our print content to digital because when they’re using this content for academic reasons, for debates or coursework, they feel happy that they can tear it up and share it and write notes, and they don’t want the distraction of social media.’

The key to straddling both worlds successfully has been a hugely aspirational IT transformation that’s focused on using data to better understand what content users want to read and how to package and sell it to them – changing to suit their needs and drive the lifetime loyalty of both offline and online readers.

This started out four years ago, with Mukherjee leading the project to change one bit of the ecosystem at a time, but it soon became clear that doing bits and pieces here and there wasn’t going to cut it.

Instead, he set out on a total digital transformation with the overarching objective of increasing the ‘lifetime value’ of each customer, making it the biggest digital overhaul of its kind ever to take place at the company.

‘We were looking to find one magical product to do all of this, but very soon realised that was a utopian goal,’ says Mukherjee, ‘so we went into a best of breed kind of mentality, putting different systems together centred around different platforms.’

‘It’s an aggressive time frame,’ he says, ‘with lots of moving pieces going a million miles an hour – it’s a complicated and adventurous programme we’ve embarked on.’

As Mukherjee explains, much of the current technology at The Economist was driven by the company’s earlier print fulfilment business.

‘If you go back 20 years, these sorts of companies were doing a decent job for their time, collecting print subscriptions, putting different label sizes with them, putting them in distribution and delivering,’ he says. ‘They were distribution-centric vendors and had all our customer data at that time.’

As The Economist started looking at digital over the past couple of decades, it began to tweak the distribution and fulfilment systems and add digital elements to them. But they found that legacy systems could only go so far.

‘We were held hostage by these vendors. Often what happens is they have our master data, and we almost had to pay money to get our data back,’ says Mukherjee. ‘Data is king in this day and age and we needed all our data, so we decided to put all our master data in Salesforce and then send it out to different systems through APIs.’

Early on, the team decided to go down the route of software-as-a-service, removing the need to invest in physical data centres and bringing added scalability for traffic to grow as needed.

This is helping facilitate a whole new customer experience beyond the content itself, and allowing for experimentation without having to make a lot of investment first.

‘The website itself is being tweaked as part of a separate programme,’ says Mukherjee, ‘but what we’re focusing on is the moment you click on subscribe or an email campaign – that entire experience that allows you to become a subscriber.’

Last year, The Economist wanted to take its standard subscriptions and bundle them together with its sister company, forecasting and advisory service the Economist Intelligence Unit, and custom research for each customer.

‘Our entitlement packages were so outdated that we were not able to do all that,’ says Mukherjee, ‘it took so long to implement it. But going forward, with the new platform on the cloud, we will have a much faster time to market, and we should be able to set it up within 24 hours and start testing things within 48 hours.’

Whereas the mobile subscription page used to be an unresponsive and frustrating experience for users, it’s being turned into a responsive, mobile-first website with a simple and clean user experience that allows users to get access immediately.

And the paywall experience is also being updated – The Economist is using a platform called Piano Media to create a more granular paywall system, targeting individual users and improving conversion rates.

‘Some people, even though they are not subscribers, might be creating a lot of buzz with Economist articles by sharing, which can be linked back to a lot more page views,’ says Mukherjee, ‘so even before becoming a customer we want to reward the relationship a little bit more.

‘Longer-term we are thinking in three to five years of putting in machine learning where data coming into the platform will feed into another, allowing us to make paywall and discounting decisions in real time.

‘Let’s say you have five different products, bundled with other sister products. You could have the machine understand that there’s a market for that particular type of person and create a bundle and sell it to them without marketing getting involved – that’s our long-term ambition.’

The final piece of the puzzle for The Economist is around improving the customer service experience.

‘In the past, our customer service approach was very compartmentalised,’ explains Mukherjee. ‘We had the account service, then subscriptions were really a separate site – it was a really weird system from around two decades ago, and you had to phone the call centre to get anything done. Right now we’re trying to put all that together into one portal with our Salesforce service cloud behind the scenes.’

The aim is to automate many of the more complicated scenarios that customer service centre users might have previously needed to call a human being for.

>See also: How the CIO of the Year transformed technology at the Financial Times – and will she do the same as Rebekah Brooks’ new CTO?

Economist users will be able to help themselves online on a self-service basis, chat live with an operative or phone the call centre as a last resort if unable to find their solution.

Throughout all of its transformation programme, the company has maintained an open dialogue with competitors including The Daily Telegraph and Time, swapping notes with those doing similar projects.

‘None of them are as crazy as us, doing everything at the same time,’ says Mukherjee, ‘but it’s great to have this ecosystem of publishers doing these kinds of transformations. There’s this vibe about our industry sector trying to showcase and put our best foot forward.

‘People tend to think publishing is old school, and so it’s hard to attract talent – bright people don’t want to join. We want to change this culture; we think of ourselves not as a publishing team but as a digital solutions team.’

The biggest challenge for the next few years will be in branching out from what The Economist is known for and finding ways to appeal to a wider market.

‘We’re upping our game in terms of B2B,’ says Mukherjee. ‘We haven’t done a great job so far in appealing to corporations. World Bank Group are some of our biggest corporate clients, but the system of access we give to them is currently not great. If we up our game in that area, we could actually make The Economist part of business curriculums, which it should be.’

The future will also be about going after customers in more geographical locations by bringing in local payment methods.

‘With the right technology in the background, the potential is limitless,’ says Mukherjee. ‘How do you go from being a niche magazine to a mainstream magazine without losing your core identity?

‘The answer is somewhere in between, where we keep ourselves niche, luxury and premium but still able to grow our market enough – and digital can be a great stimulant to that.’