Skip to content
Home » Topics » Data Analytics & Data Science » Anything but plain sailing: the IT challenge behind the world’s most extreme round the world yacht race

Anything but plain sailing: the IT challenge behind the world’s most extreme round the world yacht race 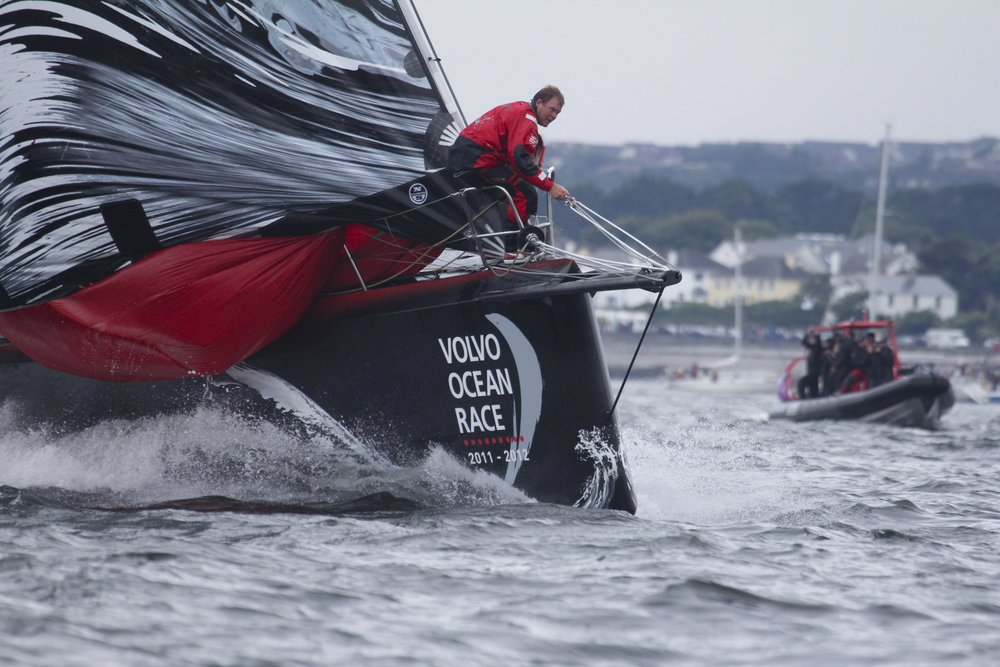 Every three years, seven teams from 16 nationalities battle it out on the world’s most trechorous seas in a bid to conquer the waves and become winner of the Volvo Ocean Race- one of the toughest and most competitive around-the-world yacht races.

It’s a hard slog- while out in the open ocean they endure gruelling days and nights of temperature extremes and rough and wild conditions, snatching four hours of sleep at a time in cramped bunks, subsisting on rationed freeze-dried sachets of food and overcoming the physically exhausting job of controlling a 60 foot beast of a boat for up to 20 days a time each leg.

But as well as the onboard battle, there is an army of land-lubber technicians that have to follow the race wherever it goes for nine months of the year, tasked with the huge technical and logistical challenge of tracking the boats, ensuring communications with the race teams and transmitting the race to worldwide media.

The IT team consists of 12 people purely responsible for infrastructure, a team purely responsible for multimedia ,TV, radio broadcasting and livestreaming, a digital team taking care of digital output such as the website and apps, and a huge constellation of suppliers and partners, both local and international.

Everything depends on Jordi Neves, the technical director currently overseeing this effort at the Race Control centre in Alicante, Spain, where all the data from the race is fed into a central hub and goes out to various third parties.

The 2014-2015 race took off from Alicante in October, and the teams are currently somewhere in the Pacific above Papua New Guinea, heading for the next ‘pit stop’ in Aukland, New Zealand, and aiming to finish in Gothenberg, Sweden this June.

‘It’s a huge logistical challenge, because we have to carry a mobile data centre with us that has to be dismantled and reassembled in every port, wherever we are in the world, through the ten legs of the race,’ says Neves ‘Four or five tonnes of equipment goes around the world in containers- everything from the data centre, to network systems, TV systems, you name it. You never know what you’re going to find in each country in terms of infrastructure or connectivity.’

The mad scramble to set up shop in a new country every few weeks would leave lesser IT heads pale, but Neves has always been attracted to life in the fast lane.

‘On the corporate side I’ve always been involved in what I’d called ‘quick’ projects- firefighting, working for international delivery firm DHL’ says Neves. ‘Then I became involved America’s Cup race. I initially knew nothing about sailing and I had to learn a lot – but you get used to the events and the adrenaline, and you get a little bit hooked.’

Offshore, each yacht contains its own mini data centre and roaming cloud, designed to be the fastest for communications from and to any location in the middle of the ocean, and to transmit as much information as possible.

‘Our main duty is to ensure safety- because they’re alone out there, and we have to monitor things like weather, the sea, ice breaks, and piracy, to give them a heads up and react to emergencies or breakages,’ says Neves. ‘We also do race monitoring, calculating the publishing the rankings and looking at all the data coming from the boats, from on board cameras, microphones and sensors, and telemetry that is sent to shore every ten seconds. We have even created a little media studio on board, with one of the team members acting as an on board reporter, dedicated to telling the story and what’s happening.’

The boats themselves are kept within a ‘black box’ where connectivity is kept private- everything in and out of them goes through Alicante because of strict racing rules, and everything is filtered and controlled. This is partly to secure the sensitive race data from leaking to other teams, who are only allowed to know how they are doing in rankings every six hours. Keeping them isolated from knowing too much makes for a more interesting race.

‘Everything has been designed for speed, and getting that content back to shore as quickly as possible via a very complex satellite network that covers 95% of the globe, provided by our sponsor Inmarsat. Without this we would be stuck in the dark about what’s going on, as we go into latitudes where there is scarce connectivity.’

Today, one of the biggest challenges today of global events like the Volvo Ocean Race, is keeping up with the demands of sports spectators in a mobile world where fans expect to be plugged in at all times. Fans can now track all race information through an interactive app, and new to this year is an interactive sailing game where fans can compete with each other to win an invitation to the next stopover.

‘Everyone has a smartphone and can livestream from their phones,’ says Neves, ‘so everything has to be suited to be consumed on mobile. It’s a trend impacting absolutely everything, including sports events. People expect a constant stream of information 24-7 at any time, and they want to engage and interact, participate and ask questions. So our biggest challenge is allowing that level of interactivity. It’s a hell of a job but it’s a revolution in the way we’re consuming content- it’s no use just watching things from a sofa anymore.’

> See also: How Murussia automated its business processes to accelerate its F1 calibre

Just around the corner, a new and even better satellite network soon to be launched will allow Neves and his team to have broadband connectivity wherever they are in the world. But what he really feels is going to be a gamechanger is the field of biometrics.

‘People look at the race from two angles – I see the sporting angle, performance of the boat. But on the other side we talk about the people on board. Biometrics will allow us to finally make the link between the boat and the people on board, to see how sleep deprivation is affecting performance, for example, and give a fuller picture of what is happening on board- and that’s our aim.’