Skip to content
Home » Diversity » The business of diversity: how a diverse workforce makes money

The business of diversity: how a diverse workforce makes money 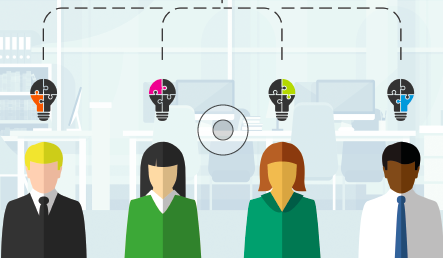 Diversity in any industry is important, as a diverse company will inherently create more products and services that connect with a larger audience.

In tech, one of the most innovative and fast-moving sectors, diversity becomes even more imperative. It’s also essential from a purely headcount and skills perspective.

It’s no secret that businesses need to evolve quickly to keep up with the digital economy, and with more job opportunities in the tech sector, diversity needs to be both embraced and encouraged simply to meet the demand.

In the UK, an IT skills gap remains. In DevOps and automation expertise, for example, the lack of qualified people to fill the jobs is having an impact on UK businesses. How quickly organisations can bring in the talent they need is a key factor as to whether their digital transformation efforts succeed or fail.

‘One of our biggest challenges in the UK is that a career in technology is still not a career choice that many are exposed to until it’s too late,’ says Mandi Walls, technical community manager at Chef Software. ‘More still needs to be done to pique young people’s interest in technology from an early age, in order to promote and educate a more diverse potential workforce about an industry that has, traditionally, been dominated by men.’

With only 13% representation in UK STEM as a whole, rising to 19% at senior level in the technology field, companies need to work hard to make technology more attractive to girls and women.

Being a diverse organisation can have a range of benefits. Making efforts
to have a diverse team can help connect with different communities. Employees will have a greater understanding of different local cultures and bring different perspectives and ideas to decisions being made across the business.

In the longer term, attracting and retaining talent will become even more critical for the IT industry, so investment now to ensure that the workforce reflects wider society means organisations are more likely to appeal to the widest range of potential candidates.

‘A diverse workforce can also build stronger employee engagement by helping all employees learn, understand and celebrate different perspectives, and challenge their own perceptions and behaviour,’ says Patrick Voss, managing director of Jeito.

For example, Microsoft looked at how laptop design is impacted based on the type of clothes people wear and their seating position when holding the device.

Elsewhere, at RBS, the company’s disability group was a driving force behind the introduction of debit cards that used Braille to make the bank’s services more accessible to customers.

‘Consider the benefits the job can offer,’ says Voss. ‘For many women, having more flexible hours or an ability to work from home can appeal when trying to juggle other responsibilities.

‘Also, consider the company’s approach to interviews, and things that may have an adverse impact on any outcome. For example, anecdotal stories being told at interviews or induction meetings referring to drunken nights out may deter some women who have commitments at home.’

But attracting employees is only the start of the process. It’s important to retain good employees too, and that means considering the working environment.

Is there a big after-work drinking culture that perhaps working mothers might struggle to participate in? Could the language spoken by the rest of the team be perceived as being ‘blokey’, which may put women off working in that department?

PwC’s Women in Technology group has created a ‘Change the Ratio’ campaign to understand the barriers to more women getting to the top in technology roles and to work towards addressing these.

The company has also launched a ‘maternity mates’ buddying scheme to support staff from pregnancy through to the return to work, while a ‘reverse mentoring’ scheme matching directors with a cross-section of junior staff is helping to challenge unconscious bias and cultural stereotyping.

‘Role models are essential,’ says Sheridan Ash, women in tech leader at PwC. ‘We need to celebrate the women already among us making a success of their tech careers. Providing flexible working options is important too.

‘Embedding the importance of improving gender diversity across a business is key – there needs to be a plan for how to tackle this issue, as well as accountability and targets to drive change.’

Running parallel to the issue of female representation in technology is the gender pay gap that plagues the industry, and indeed many other industries.

People assume that a gender pay gap means that men and women are being paid differently for doing the same role – in fact, a gender pay gap is more likely to exist because an organisation has more men in senior positions or hires more men externally at senior levels.

The important thing is that organisations measure their gender pay gap and understand why it exists in the first place, so that they can take action.

‘Our policy of being transparent on where we are now and where we would like to be in the future should help keep us at the forefront of change,’ say Ash. PwC has publicly reported its gender pay gap since 2014, and this has increased the
focus across the firm to address the underlying causes.

Having realised that senior women are more likely to be replaced with senior men when they leave the company, PwC introduced a return-to-work scheme for senior women who have been on a career break.

The initiative aims to get more experienced women back into the workplace and to challenge PwC’s recruitment processes.

The company has been particularly focusing on making a difference
with this scheme in its technology practice, which has fewer women at all grades, but especially at the more senior grades.

‘We are focused on increasing our pipeline of women overall and at every grade, and developing and advancing women to senior technology leadership positions,’ says Ash.

Hitting the target, missing the point

Companies have long debated the merits and drawbacks of introducing targets in order to address diversity. According to Voss, this doesn’t work.

Instead, companies should think through where they are currently on gender balance and set realistic targets based on the pool of talent available in the marketplace, he says.

Also, organisations often rely on gathering data on their employees as a means of measuring company diversity. Often this is taken when a person joins the company. However, like all data, it’s not collecting data that’s important, but what you then do with it.

Flow rate analysis can provide insight into gender career journeys, which can then be used to target interventions. But diversity data doesn’t just mean taking a balance sheet view of a snapshot in time.

‘Over a period of time, this data can show you a whole range of things, such as which types of staff might remain employees for longer and which are more likely or not to return after periods of leave, including parental leave,’ says Voss.

‘It will also show you the characteristics of who is being promoted or not. This in itself will give you a useful snapshot of whether certain groups get to a specific level and then move no further.’

There’s plenty of research to show that companies benefit from diversity in several ways – as a driver of internal innovation and business growth, for example, through increased willingness to express differing opinions or with access to better problem solving and creativity.

A study by McKinsey demonstrated that companies with diverse executive boards had higher earnings and returns on equity. But there are several key areas that need work, such as early exposure to computer science, female engineer role models and women-friendly cultures in tech departments and companies.

‘We need to change the stereotypes surrounding STEM roles,’ says Therese Stowell, principal product manager at Pivotal. ‘There really is no such thing as a “typical” programmer or software developer. We need to show that tech jobs offer a route into almost any industry, from climate change to retail, entertainment to communications.

‘We’re problem solvers; we work across numerous disciplines and we need people from all kinds of backgrounds.’

Culture is key in retaining women in these tech roles. Coding culture is changing, and the industry must change too. Coders now work hand in hand in multi-discipline teams to share knowledge, skills and expertise.

To get more women into senior management, and to retain women in tech, companies would benefit from a sponsorship model where senior leaders help to plan and promote the careers of women.