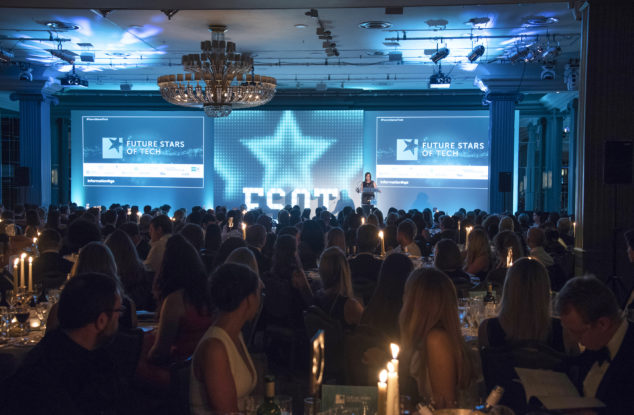 On Wednesday evening, 400 people from across the technology industry descended on the Grosvenor House Hotel, Park Lane, London for Information Age’s inaugural Future Stars of Tech – the diversity event celebrating and empowering the next generation of female technology leadership in the UK.

Despite efforts from employers, educators and government to make technology more inclusive, female participation remains stubbornly low. Women occupy just 16% of IT jobs in the UK and make up less than 14% of CIOs, less than 10% of tech CEOs and less than 5% of board directors at tech firms.

This lack of diversity is producing significant restrictions on innovation and decision-making, and creates an off-putting image for young women thinking of joining the industry at a time when a digital skills shortage exists across the UK. For this to change, employers must recognise their female rising stars and nurture them into senior leadership.

Future Stars of Tech provides this platform for recognition through its awards programme. By identifying and promoting the industry’s top female career climbers, last night’s event demonstrated diversity as a positive, necessary force, not a challenge, in the world of technology. And by boosting the visibility of female talent in the first eight years of their career, women are provided with the tools and exposure to be role models to young people.

Dawn Franklin, IT Service Management Programme Director, London Stock Exchange – premium sponsor of Future Stars of Tech – opened the keynotes with a fascinating insight into her expansive career, with a particularly poignant message of coming through adversity, referencing the tragic events of 9/11 during her time in New York as a female VP in IT at Goldman Sachs.

“I was at the forefront of recovery during the 9/11 terrorist attacks. The Goldman Sachs offices faced the towers. After evacuating the building and fleeing to the East River, I found myself wearing three hats: a victim, in triage mode trying to assess the impact and full on disaster recovery. As you can recall, nobody for days knew the impact and how New York City, let alone the business community, would recover. There was very little guidance, and decisions I made had to be the ones that would work. We couldn’t look back. When I think back to that time, I realise now just how much my will, resilience and perseverance was tested and strengthened for the better.”

This keynote was followed by the Women in IT Awards UK Woman of the Year, Sheila Flavell, COO of FDM Group (who have a 50/50 split of male and female representation in management), who delivered three key tips for those women in the audience, many of whom were at the beginning of their careers in technology.

“It’s no longer about me and other members of my generation. It’s all about you [referencing the Future Stars of Tech in the crowd]. So, I want to give you three tips.”

“The first one being: follow your dreams, because the word impossible should not exist in tech…You can shape your life any which way you choose. Number two: stand up for the industry, give tech the reputation it deserves. Now, you as the next generation of technology leaders, need to make sure the positive change that tech can bring is highlighted. Number three: transform our industry for the better. Diversity is a driver for excellence. Our industry turns over billions of pounds every single year, yet still women, ethnic minorities and people from disadvantaged backgrounds are very purely served. So, I ask you all – how can we deliver the kind of innovation needed to drive our economy forward, if we fail to reflect the society that we serve? As future leaders, you have the power to change this. So, use this privilege to open our industry and help it become the kind of diverse sector it should be. It is often said with age comes wisdom, but I’m telling you tonight, with youth comes change.”

Both keynotes served as the perfect way to kick off the evening, highlighting women at the pinnacle of their careers who provided inspirational advice and anecdotes to the Future Stars of Tech audience.

Future Star in IT Management, sponsored by Schroders

Future Star in Software and Services, sponsored by Belvedere Communications

Future Star in IT Infrastructure, sponsored by Girls in Tech