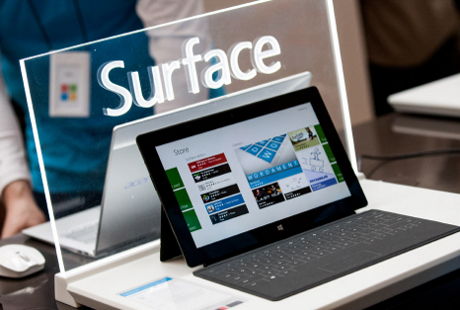 Microsoft has so far sold 1.5 million Surface tablets, according to the Bloomberg news agency.

Citing "sources familiar with the company", Bloomberg reports that the software giant has sold slightly over a million of the RT version, which uses a chip designed by ARM and a cut down of the Windows 8 operating system, since it was launched worldwide in October last year.

It has sold 400,000 units of the Surface Pro, which has an Intel chip the full Windows 8 operating system, since its launch in February, Bloomberg claims.

Microsoft has yet to confirm or deny the figures.

In January, market watcher IDC reported that Microsoft had sold around 900,000 Surface RTs in the fourth quarter of 2012. If Bloomberg's report is correct, this would imply Microsoft has only sold a little over 100,000 RT tablets in 2013 so far.

Worldwide tablet shipments numbered 52.5 million during the quarter of 2012, IDC said. Apple sold 22.9 million iPads during the period and accounted for 43.6% of the market. Microsoft's share was 1.7%.

"Very simply, the lack of Surface sales is down to the lack of intuitive nature of the interface, a lack of apps and then probably not competitive enough price point," Ranjit Atwal, research director at analyst company Gartner told Information Age in an email today. "Lastly, emphasising a keyboard that will be of minimal use in the consumer space is the wrong way to show value add."