The moment Her Majesty The Queen sends her first tweet 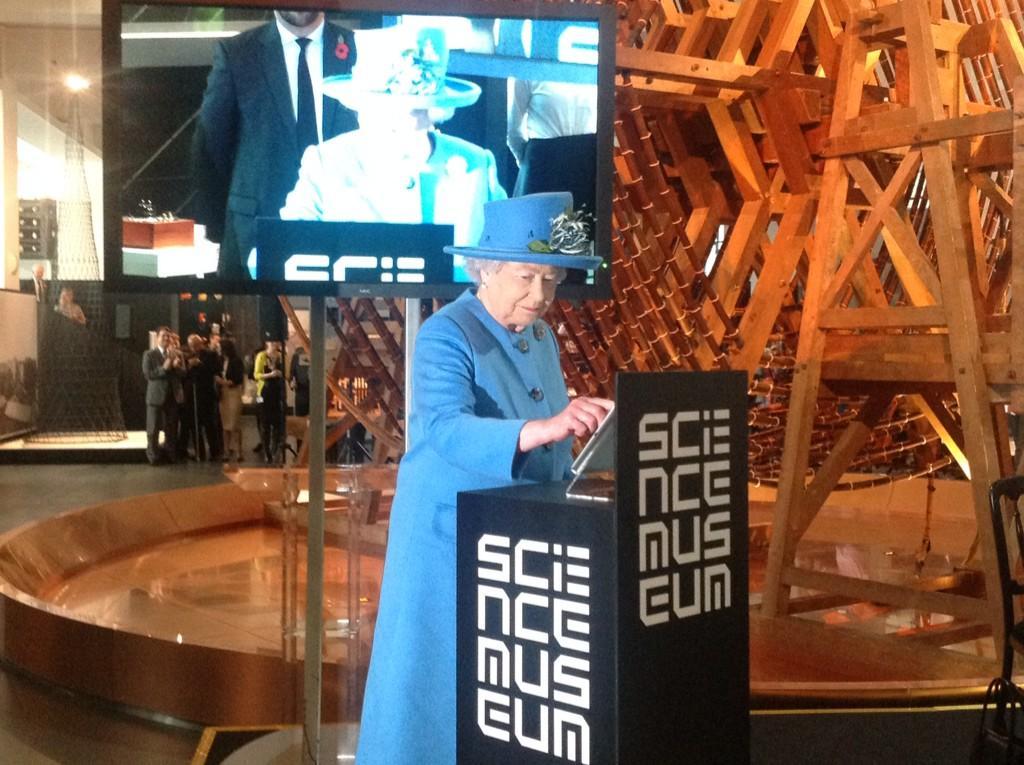 Her Majesty The Queen today sent her first tweet to celebrate the opening of a new Science Museum exhibition focused on the Information Age.

The first tweet by a reigning British monarch read: ‘It is a pleasure to open the Information Age exhibition today at the @ScienceMuseum and I hope people will enjoy visiting.  Elizabeth R.’

The Queen and His Royal Highness The Duke of Edinburgh had earlier toured the landmark gallery, which explores the technological breakthroughs that have transformed how humans communicate, listening to personal recollections of people whose first experience of television was watching the Coronation in 1953.

Inviting Her Majesty to open the gallery, Science Museum Director Ian Blatchford remarked on how The Queen has harnessed advances in communication technology throughout her reign.

‘I mentioned earlier that Queen Victoria took a great interest in the invention of the telephone, and Your Majesty has followed in this tradition of embracing new technology,' he said.

'You made the first live Christmas broadcast in 1957 and an event relished by historians took place on 26 March 1976, when you became the first monarch to send an email, during a visit to the Royal Signals and Radar Establishment. May I now invite you to join me so that you may send your first tweet.’

The Queen removed a glove to send the tweet from the @BritishMonarchy Twitter account in front of around 600 guests, including communications entrepreneurs and experts Baroness Lane Fox, Hermann Hauser, Mo Ibrahim, Professor Steve Furber and Sir Nigel Shadbolt.

Information Age: Six Networks That Changed Our World is the first museum gallery dedicated to the history of information and communication technologies. From the first transatlantic telegraph cable that connected Europe and North America in minutes rather than weeks, to the advanced computing power of the modern smartphone, it looks at how the modern connected world was created through six communication networks: the telegraph; the telephone, radio and television broadcasting; satellite communications; computer networks; and mobile communications.

Lead curator Dr Tilly Blyth showed The Queen and The Duke of Edinburgh a colourful call box from Cameroon in the mobile communication section of Information Age.

The introduction of mobile networks in Cameroon in the late 1990s had a huge impact on the daily life of most Cameroonians. The bright yellow call box illustrates the small businesses that sprang up across the country as a result, capitalising on the public need to buy call credit and make calls at a time when mobile phones were prohibitively expensive.

The tour concluded with The Queen sending her tweet, standing in front of the monumental six-metre high aerial tuning inductor from Rugby Radio Station in the centre of the gallery.

This enormous and strangely beautiful object made of copper and wood was once part of the most powerful radio transmitter in the world and was donated to the Science Museum by BT.

The gallery features more than 800 unique objects from the Science Museum collections, as well as state-of-the-art interactive displays to illustrate the dramatic personal stories of those whose lives were changed by each new wave of technology. The 2500m2 gallery has been designed by consultancy Universal Design Studio.

The Science Museum has also commissioned BAFTA award winning artist Rafael Lozano-Hemmer to create a unique digital art work for the gallery. Fiducial Voice Beacons is a dynamic light and sound installation that all visitors will be able to interact with and is Lozano-Hemmer’s first permanent commission in the UK.