Skip to content
Home » IT Support » The neutral budget 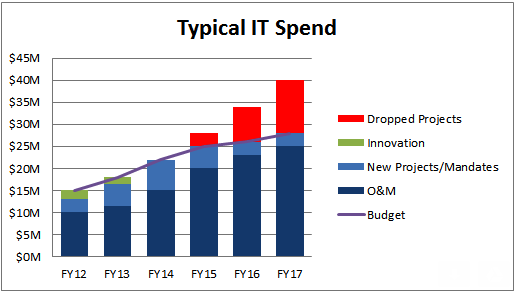 After over a decade of uninterrupted growth, 2002 was the year when IT budgets went into reverse. In fact, IT decision-makers were so unwilling to take out their chequebooks that IT adviser Gartner deemed it “a gap year'” for IT departments. While few would have felt like they had taken a year out, interest is now turning to a critical question: Is 2003 going to be more of the same? The short answer is that most are predicting that there will be little if any rise in IT budgets in the coming year, with many decision-makers focused more on finding innovative ways of stretching their current resources than lobbying for increased cash.

That message resounds around every conversation with IT directors and CIOs: they want to reduce the cost of the IT infrastructure while convincingly demonstrating the value that technology brings to the business at all levels. With companies no longer willing to spend money on hardware and projects without a very good business case or ROI projection, IT executives have to show that technology both saves and earns the company money and is not simply a drain on resources.

Analysis group Gartner says that, as a whole, enterprises cut IT spending in 2002 by approximately 7% worldwide. Given the immense pressure on IT directors to cut costs, it might be surprising that the drop was so little, but analysts at investment bank Merrill Lynch and Howard Rubin, executive vice president at analysis firm Meta Group, say budgets just cannot get any lower. Around 80% of spending is maintenance, according to Merrill Lynch, so costs can only drop 10% to 20%. And Rubin says that, “most companies have already cut into their discretionary spending and can’t afford to cut any more without putting day-to-day operations at risk.”

As a result, cost-consolidation rather than cost-cutting has many adherents. By concentrating on projects that reduce yearly costs, leasing equipment rather than buying, and outsourcing, CIOs are able to decrease capital expenditure and staff counts while (hopefully) maintaining the same level of service. Enterprise application integration projects are one of the most popular ways of cutting long-term costs and delivering a quick return on investment, according to Merrill Lynch.

Only security remains equally paramount to most IT decision-makers. In the wake of high-profile breaches, they are under pressure from the company board to ensure that systems are protected from intrusion and embarrassing or even business-threatening downtime.

Well aware of how tight budgets have become, vendors and know that they will have to continue to make compromises and find innovative sales approaches if they are to avoid a collapse in revenues. Being cash-rich certainly helps. IBM, for example, has started offering zero-cost deals on its hardware, with nothing to pay for 90 days, as well as lower-cost financing in an effort to capitalise on diminished budgets. Many IT directors are also trying to negotiate lower software licensing costs.

Yet some argue that the traditional approach to IT budgeting fails to take into account some of the peculiarities of the sector, that the approach has fallen behind the times or is just plain wrong. For instance, the Gartner Group maintains that a company with between $1 billion and $5 billion in revenue can reduce IT support by between $4 million and $6.5 million using a total cost of ownership, rather than a standard approach to budgeting.

Richard Charlesworth, divisional sales manager of Siemens Financial Services, says that spending patterns have changed, so budgeting should change to match: “Spend on technology infrastructure, hardware and software is now constant rather than sporadic. Rather than budgeting for this on a yearly basis out of a capital budget, it is far more cost efficient to account for it in a way that reflects its continual nature.”

Equally, Colin Beveridge, director of Online Interim IT Management, says that IT infrastructure should be looked at in the same way as “the carpet in reception”. “Everybody in the building uses it, without a second thought, and it needs replacing regularly to preserve functionality,” he explains. “Unlike IT infrastructure, nobody expects a return on investment from their physical infrastructure – it’s just a cost of doing business.” IT directors are so busy trying to be “bottom-line savvy businessmen, they are neglecting the mundane, less-exciting, corporate plumbing,” he adds.

As such, organisations need to look at how they measure IT’s worth if they are to avoid damaging their own competitiveness by cutting the wrong things. Clearly, juggling spend in 2003 will be as tricky as in the current year.