Tomorrow’s Tech Leaders: the next generation of female tech workers 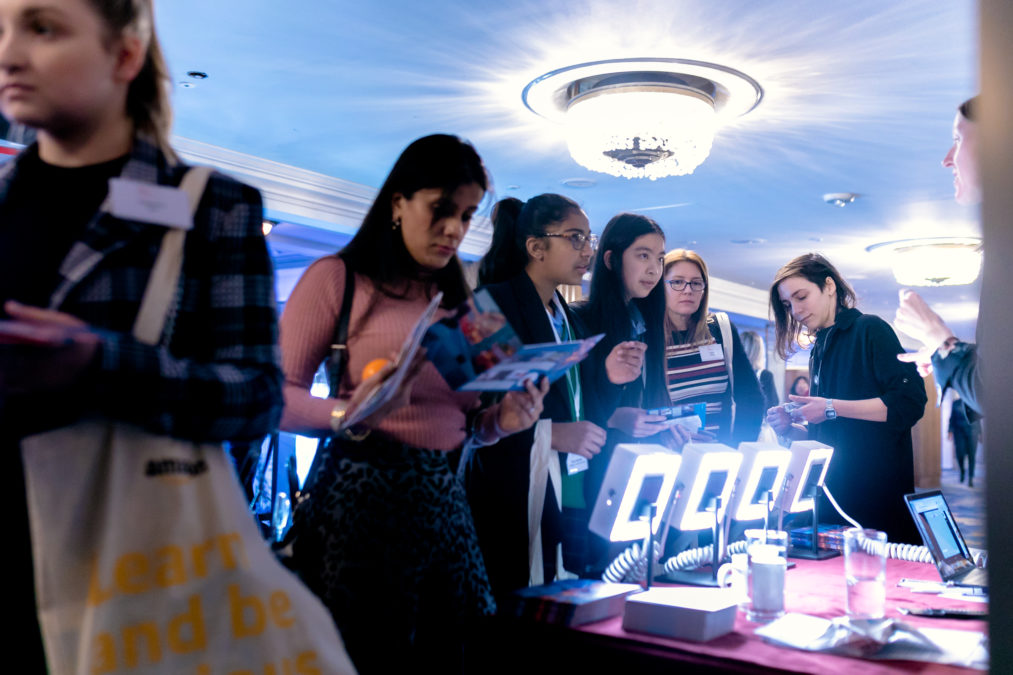 The lack of diversity in the technology industry is quite staggering. According to the Office of National Statistics, only 3.9% of people working in tech and telcos are female software developers and engineers – a figure that is down from 10% in 2007.

The core reason for this: not enough has been done to encourage young women to pursue STEM subjects and a possible career in IT and tech.

This is bad news because IT and technology companies are missing out on the innovation and talent they can offer. It’s also harming their bottom-lines, according to McKinsey Global Institute, the UK’s gender gap in work is estimated to cost the economy £150 billion by 2025 in GDP.

Events like this one are essential for fighting this issue. The free-to-attend event hosted numerous female graduates and job-seekers, providing the opportunity to network with employers and learn of exclusive job vacancies.

Attendees of the careers fair also got to hear from a series of sessions and discussions led by some of technology’s most prominent personalities.

The winners of the Women in IT Awards 2019 UK are revealed!

Over 1,200 business and technology leaders gathered at the world’s largest tech diversity event in London last night as award winners were crowned across 21 categories

Before joining LSEG in January 2018, Iain spent over ten years at a leading US investment bank where he was responsible for hiring graduates into a variety of roles, from trading to technology.

A fantastic day at the ‘Tomorrow’s Tech Leaders Today Careers Fair’ for our Yr8 hosted by Amazon at the Grosvenor House, Park Lane. pic.twitter.com/OalTW7bWKV

He explained that tailoring applications to a specific company, and displaying a passion for the role or industry was crucial for successful applications. He also said just because your not “super techie” doesn’t mean your skills will not be useful in this sector.

More to tech than technology

According to research by PwC, only 3% of female students currently considering a career in tech. But with so many opportunities and possibilities for women in the tech sector right not, it begs the question: why is this so?

Arguably, it’s because there are too many negative stereotypes associated with the industry, mainly surrounding the types of roles available and whether they are accessible to women. Socially engineered stereotypes of the tech industry, its history of male dominance and women’s perceived place within it have also significantly dampened diversity and belief.

According to many of the speakers at this event, it’s also because careers in tech are fundamentally misunderstood?

Speaking at the event, Irene Boni, Ad Interim Chief Technology Officer at YOOX NET-A-PORTER GROUP, reflected on her own career and explained why a job in tech means so much more than people commonly think.

For her, working in tech is not about looking at a computer all day; technology is about developing products for people by people.

Ultimately, a diverse group of people is needed to ensure the maximum value from technology products and services.

Many of the other speakers from the event echoed this viewpoint to the female graduates in the audience. Some even argued that not coming from a traditional tech background is, arguably, an advantage, because those candidates realise business value. Technology should ultimately be used to enhance business value, but for most “techies” this is not at the forefront of their minds.

The value of women

“Ultimately, we want to find the best talent out there, and we feel we’d be missing out if we didn’t try to attract women, said Boni during her speech. “Women have numerous intrinsic characteristics that make them really well suited to technology. We are adaptable, resilient, dedicated, creative and empathetic. We can connect with people and understand them beyond their words.”

According to Boni, Over 60% of employees at YOOX NET-A-PORTER GROUP are female, and 64% of new hires are women. About half of there executive team is also female.

Creating such as female-inclusive workforce came with its challenges. According to Boni, to create such an open environment, they had to break a lot of barriers. Starting with the recruitment process, they tried to remove any terminology from job descriptions that might put women off, and they also strived to provide flexible working options.

In it’s first annual event, the Tech Talent Charter announced it has received Government funding as it welcomes its 90th signatory at a launch event in the dizzying heights of the Gherkin. Read here

What is clear now, however, is that IT and technology companies must embrace diversity to spur innovation and stave off disruption.

Luckily, events like Tomorrow’s Tech Leaders will continue to encourage women to pursue careers in tech when it returns next year.