Women in IT Awards 2018: nominations open! 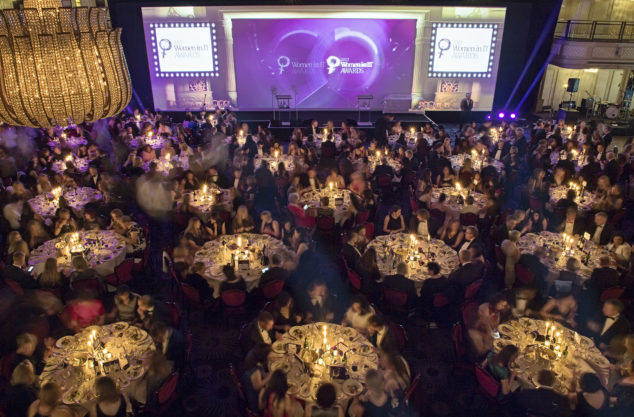 The world’s largest tech diversity programme, the Women in IT Awards, is now accepting nominations for its fourth annual event, which will return to the prestigious Great Room at Grosvenor House, Park Lane, on 31 January 2018.

The Women in IT Awards, organised by Information Age in partnership with Amazon Web Services, aims to tackle the technology industry’s gender imbalance by identifying new female role models and promoting collective dialogue around diversity among key industry stakeholders.

The initiative, which celebrates the achievements of women in technology, has gathered resounding support from trade associations, politicians and companies of all sizes and sectors since launching in 2015.

The most recent edition of the event, on 25 January, was attended by 1,000 business and technology leaders and featured a surprise keynote speech from Sir Alex Younger, head of the Secret Intelligence Service (MI6).

The MI6 chief said attracting the best IT talent is a priority for him as technology continues to transform the capabilities required of Britain’s foreign intelligence agency. And with around eight in ten IT roles filled by men in the UK, Mr Younger stressed the importance of attracting more women to the industry.

The awards were hosted by TeenTech CEO and TV presenter Maggie Philbin, who was appointed an OBE in the New Year Honours list for her work in sparking young peoples’ interest in STEM and the creative industries. Comedian Jo Caulfield provided entertainment.

Meanwhile, Rolls-Royce was victorious in the Employer of the Year category, Claire Priestley of City, University of London was awarded with Future CIO of the Year, and Azoomee’s Estelle Lloyd won Innovator of the Year. Editor’s Choice went to Vladlena Benson of Kingston University, e-Skills Initiative of the Year to Amali de Alwis of Code First: Girls, Digital Leader of the Year to Beverley Bryant of NHS Digital, and Rising Star of the year to Harriet Lester, Internet Watch Foundation.

Brynne Herbert of Move Guides was named Entrepreneur of the Year, Bethany Mayer of Ixia took Global Leader of the Year, and Auto Trader’s Alison Ross walked away with the prestigious Woman of the Year gong.

The 2018 edition of the awards is set to be the biggest and best so far, as Information Age continues to grow the initiative in both size and influence. The Women in IT Awards has become the flagship event among many global and wide-reaching efforts to bring diversity to the technology industry.

The nominations period is now open and will close on 18 August 2017. There is no cost to nominate and no limitations on the number of categories a company can enter. All nominations are submitted through the website, where each written submission should be at least 600 words and a maximum of 1,000 words.