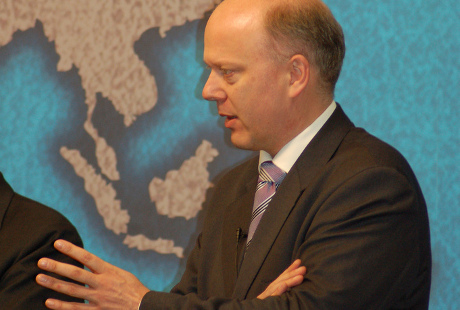 Speaking on Radio 4's Today programme this morning, Grayling said that he agrees with the principle of amendments such as "right to be forgotten", which would oblige companies to delete data about customer on request, but not the way in which the EC proposes to enforce it.

The EC "is trying to legislate for Google and Facebook," Grayling said, "while forgetting that the impact on small and medium-sized businesses around Europe can be enormous."

"For example, if you are selling an item on eBay from home or you are running a campaign on Facebook to save a local post office, are you going to then be sucked into data protection rules?

"Are you going to have to implement the right to be forgotten for somebody who signs on to your campaign?

"The way the European Commission [has proposed] the regulations at the moment, there are huge question marks about that. It's not simply about saying to Facebook, if somebody wants to disappear and remove photographs of their childhood that might be embarrassing, they can do that – it's the knock on effect."

Grayling reiterated the Ministry of Justice's position, calling for a new data protection directive, which can be interpreted by member states, as opposed to the EC's proposed regulation, which countries would have to follow to the letter.

"What we're asking for is flexibility," he said. "A directive gives member states some flexibility to adapt the systems to their own economy."

He also pointed to the MoJ's own calculation for the economic impact of the the reforms: £220 million a year.

"Ultimately, those people who want the right to be forgotten. I support that.

"But those people who want a job, I support them as well, and if we add hundreds and millions of pounds a year to the costs of British business, we'll have fewer jobs, and that's good for no-one."

In response to Grayling's comments, Pirate Party UK leader Loz Kaye said that UK government's policy on data protection is being shaped by its attititude towards Europe.

"Once again we can see how the government's continuing political difficulties on the issue of the EU is leading to them letting UK citizens down," Kaye said. "It's vital that we positively engage to protect British people's information and rights over how it is used.

"This has to happen at an international level because of the reach of companies like Facebook and Google."

Kaye also criticised Grayling's remarks at the start of the interview, in which he said the data protection reforms are unrelated to ongoing concerns about Interent surveillance by US and UK intelligence agencies.

"It is also utterly wrong to say the concerns brought up about PRISM and TEMPORA, and the wider issue of data protection are not linked," he said. "Whether our information is being abused by government or companies, it is still about our right to a private life."