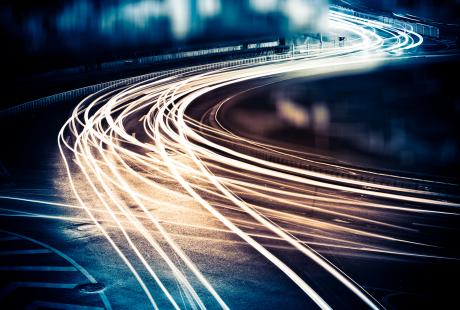 Imagine a form of data transfer which enabled you to download 18 HD films in just one second: welcome to Li-Fi.

Through the power of LED lighting, it could soon become reality.

It uses light-emitting diodes from LED bulbs to transmit at high-speed (way faster than the eye can see).

It’s similar to how a TV remote control works, encoding information in pulses, like a superfast form of morse code.

That means no major installations or upheaval to infrastructure – simply adding a microchip to existing bulbs will work.

It has the potential to revolutionise the way data is sent.

The visible light spectrum is 10,000 times bigger than the radio spectrum. So it’s up to 100 times faster than Wi-Fi, and has been recorded at 224 gigabits per second under laboratory conditions.

It’s also a game-changer for pricing.

Sending data by light, rather than electromagnetic waves, transforms efficiency and pretty much eliminates the costs of data transmission.

Smoothing out the data crunch

Li-Fi doesn’t transmit through walls, so it’s primary use is expected to be in combination with Wi-Fi.

However, the potential for using it in colocation or data centres offers intriguing possibilities, because it offers a solution to the potential “data crunch”.

>See also: How the car will soon become ‘Wi-Fi on wheels’

This is where demand for data will outstrip the current infrastructure, because whereas Wi-Fi slows down as more people get connected, Li-Fi is unaffected.

Also, unlike public Wi-Fi signals that can be hacked and cloned, Li-Fi should provide more secure internet connections.

Another plus is that Li-Fi doesn’t interfere with radio signals.

So there’s potential for use in aircraft, hospitals, or any busy urban area where bandwidth is limited.

It might even put an end to the frustrations of being unable to send “Happy New Year” text messages at midnight on 31 December because the network is clogged.

The term “Li-Fi” was first brought to a wide audience in a 2011 TED talk, by Professor Harald Haas of the University of Edinburgh.

The following year, the “father of Li-Fi” founded his own company to further develop the technology.

Since late-2015, scientists at Velmenni, an Estonian startup, have been testing the technology (Visible Light Communication) in office and work environments: “We are doing a few pilot projects within different industries where we can utilise the VLC (visible light communication) technology,” explains Deepak Solanki, the company’s CEO.

Analysts expect to see a major growth in Li-Fi market size, with an estimated 80% compound annual growth rate from 2016 until 2023.

This is timely, because now’s the time that IoT is really taking off.

However, the one concern about IoT has always been whether there’s infrastructure in place to support it.

Of course, it’s still early days for the technology, although Apple is believed to be exploring the potential of Li-Fi for iPhone.

Since iOS 9.1 “LiFi capability” have been present in the library cache file of iOS 9.1.

For now, it may be a case of watch this (LED-illuminated) space.