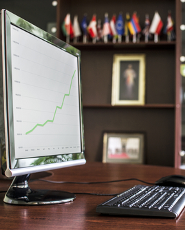 Overall PC shipments in Western Europe totalled 15.3 million units during the last quarter of 2012, Gartner said, a decline of 11.7% year-on-year.

For the full year 2012, shipments in the region reached 58 million units, sliding 8.4% compared with 2011. Mobile and desktop PC shipments fell 12% and 10.9% respectively in the quarter, Gartner said.

While the consumer PC market declined 17.6% during the quarter, Gartner said the 4.9% dip experienced by the professional PC market was softened due to businesses refreshing their workstations.

"The PC market in Western Europe is in a downward spiral," said Meike Escherich, principal research analyst at Gartner. "The second consecutive yearly decline indicates that the issues the PC market faces are beyond a weak economy, a poorly understood new operating system, or Ultramobiles being priced too high to generate demand.”

Acer, Lenovo and Asus were tied for second, third and fourth place respectively during the quarter, with 11% market share respectively.

Gartner said a strong focus on increasing share helped Lenovo become the second-biggest vendor in the professional PC market with a 4% increase year on year.

Dell, which recently announced it would be taken private in a deal worth $24 billion, had the fifth-highest market share at 8.7%, a dip of 1.2% year on year.

PC shipments in the UK reached 3.1 million units in the fourth quarter, Gartner said, a slight decrease of 0.7% year on year. The market declined 3% in 2012, seeing 11.7 million units shipped, it said.

Ranjit Atwal, research director at Gartner, said that any seasonal consumer upturn in the fourth quarter failed to materialise.

"The shift to other devices has become a permanent trend, leaving the PC market struggling to show value, either from Windows 8 or the new thinner and lighter PC," he said. "While the consumer PC market continued to decline, the professional PC market returned to growth after two consecutive quarters of decline."