WIT USA Q&A: Work to be done regarding tech inclusivity 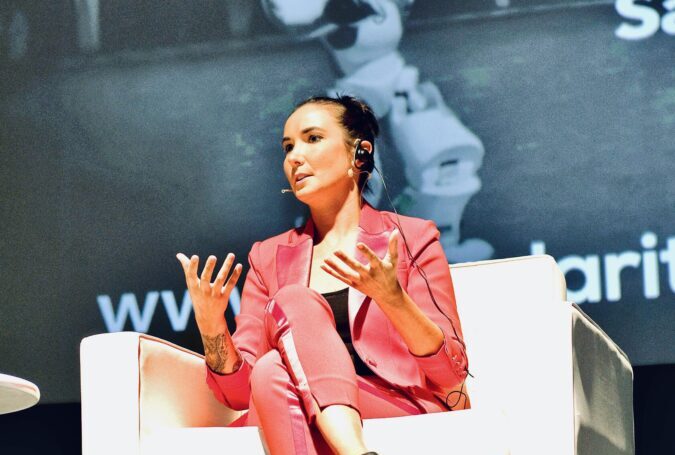 Cultural technologist, best selling author and entrepreneur Samantha Radocchia (otherwise known as Sam Rad) spoke to Information Age about her journey in the tech industry and how technology can better benefit society and humanity

Samantha Radocchia — also known as Sam Rad — is the founder of numerous companies dedicated to improving the human experience and connection with ourselves, each other, and the environment using technology. Radical Next is a consultancy focused on helping businesses thrive with emerging technologies such as blockchain and virtual and augmented reality (VR/AR). Meanwhile, Chronicled, a San Francisco-based blockchain company, pioneered the link between the physical world and digital world, also known as Web 3.0. In addition, she is the author of the #1 Best Selling intro to Web 3.0, Bitcoin Pizza, and a contributing writer for Forbes.

Radocchia will be speaking at the upcoming Women in IT Summit USA, discussing the future of tech and its impact. In this Q&A, the cultural technologist delves into her journey through tech, the work that needs to be done to make tech more beneficial for society, and how tech leaders can bolster their DEI efforts.

How did you manage to initially get into the tech industry, and what inspired you to enter the space?

I’ve always been a bit of a flaneur, a student of humanity. I was trained in theater and anthropology, and I completed my graduate research living in a virtual world called Second Life, focused on digitally-native societies, cultures, and economies. But really, I got my start in tech as an undergrad. This was right around the time when people started bringing computers or other devices into class, and I would just watch people aimlessly browsing. And I actually wanted to make a theatre production or documentary about it.

I brought a group together one summer to found my first company — an AI online personal shopping assistant called “Shop with Stella”, later renamed to the online platform Stunable. I was more interested in documenting the process than necessarily starting a company, and it traditionally began with a bunch of college kids coming together in a Brooklyn loft to build some stuff. This ended up getting picked up as a TV series! So this led to some experience in being a kind of cultural critic, exploring the impacts of tech on people and humanity into building what then became a business. Stunable became the first company to integrate real-time inventory data and payment processes across tens of thousands of retailers, not to mention pioneering the “fashion genome project” as a part of our AI efforts. This was in 2010.

After I exited that business, I did a lot of work as a self-taught engineer as well, at that time, I did some work with some board members at Overstock.com, helping them establish a few internal ventures, early in the Bitcoin space. Through that, I met who would become my co-founders at Chronicled. Here, we just really wanted to explore non-financial use cases for blockchain technology. We ran the company for the first four years, as a venture production studio, I lead product and marketing, and we basically, looked to represent physical objects, devices and sensors on blockchain, which may have led to what people refer to today as non-fungible tokens (NFTs), which, of course, are parts of the building blocks of this next phase of the internet, or Web 3.0. So we were very early in creating that infrastructure.

After Chronicled, the company went through a transition in focus, and during this I wrote a book called Bitcoin Pizza, which takes all of the knowledge I developed over five or six years and brings it down to 101 level. Chronicled helped maybe 20 or so companies get off the ground, and the book has the opportunity to impact hundreds of thousands across every industry, in 100s of countries.

Radical Next is something that I’ve overseen since I was 18 — I’ve always considered myself a “student of humanity” whether that be through theatre or anthropology or music. My ongoing work with Radical Next combines these interests in a hybrid of consulting, education, and storytelling to contemplate the impacts technology has on society. We do anything from standard thought leadership to more creative endeavours such as film, literary fiction, music, and more. A fiction book is what’s next for me!

What would you say is the greatest concern that we should be tackling when it comes to ensuring that technology is benefitting society and humanity, rather than endangering it?

Technology in and of itself is neither positive or negative, it’s a tool. But it’s a very massive force and over the past two decades or so we’ve seen its development, primarily in relation to the internet and social media that in so many ways disintermediates humanity – our connections with ourselves, with each other, with natural and built environments, with the products we consume. So I have always set out first to understand what’s happening to humanity as it relates to technological change and second, how we can create new cultural and social models as human beings in this new context.

And the most important element here is people. The people building products, services and companies, the people funding it, the people consuming it.

The diversity of teams and who you bring in from the top down, firstly, needs to go way beyond ticking quota boxes. Some good advice I received when I was raising my most recent round for a previous company was: Think about who you want to empower. When we had the goal of selling the company and sharing that with the community on our platform, we had to ensure we were properly serving a diverse group of people using it.

Secondly, having spent most of my career researching decentralisation, not just in technology, but its impacts on society and where we’re going, the way that a company is structured, and the business model, is also really important. We’ve had 10 to 20 years of companies with the goal of building value for its shareholders, which is a very small group of people. This doesn’t allow for diversity or inclusion. So we need to start to think about new models of social organisation. One example could be decentralised autonomous organisations — or DAOs — where you can build value for tens of thousands of people, and share that value. Instead of saying ‘we’re going to have this conversation online and sell the data from it to advertisers’ and extract the value from that, how about saying ‘Okay, we’re all going to participate in that’.

What would you say to young people who might be on the fence about pursuing a career in tech?

Today, a tech career can enable you to be on the forefront of global-scale societal and cultural change, going beyond simply creating another app. Tech is now quite broad, and is starting to encompass sustainability among other worldwide challenges.

Because tech is so broad, there are so many ways to get into the industry. It no longer means you need to go to a coding boot camp and become a software engineer. If you look at the course of history, the people who really enacted change were kind of countercultural, whether they be artists, writers or thinkers.

There has been a bit of criticism of the way that the tech industry has done business for this past kind of cycle of Web 2.0. But I think for young people, if you’re thinking about it, I’d say yes, get involved. But don’t think that it needs to be a clear cut path of studying computer science, because I think the industry needs ethicists, artists, writers and thinkers. Whether it is writing, music, drama, dance, painting, sculpture, or making little paper mache figurines – the most important cultural elements that will drive the next wave of change will come from the arts. Only from this basis will we build new organisational models that make a positive impact on society. It’s certainly what I think we were lacking in the past, and we’d benefit from the perspectives of this younger generation that’s coming up, which does feel very values-oriented.

Where have you seen the most positive impact from tech advancements in the past few years?

I have really enjoyed watching the trajectory, and think the mindset and impacts of Web 3.0 will be incredibly impactful. For me, it’s less about the technologies that underpin it, or that will support the ideas, but more so these ideas around experimental or new ways of collective value creation, business models or organisational design.

For example, instead of a factory shipping products all over the world, we could see the creation of a decentralised, globally distributed factory of 3D printers that would reduce waste, because you could produce everything on-demand. As well as hitting the sustainability side of things through efficiency, it’s also coming from the overall trend of decentralisation.

Of course, personalisation and AI has been accelerating. I think this will make things in life more efficient. Energy is also quite interesting to me. I was at a construction industry conference recently, which discussed the shift from gas power to electric for large farming machines, and this was their big debate. It’ll be interesting to see what that means, both for infrastructure, but also reduction of fossil fuels and moving the entire planet over to essentially a new grid. So, all of those things excite me.

What advice would you give to tech leaders looking to strengthen their internal workforce DEI efforts, from talent hiring to retention?

Publishing diversity data, while great for PR and recruitment, means nothing if the culture isn’t there. You can publish all the data you want, but if the culture has not been built to really support that diversity, it won’t work long-term. This needs to go beyond paying for food and childcare, and accommodate all backgrounds, living situations and family situations.

This is a lot easier to do if you’re starting fresh. People may come in and build a new company, and really think about this from the bottom up. Then, also when designing a leadership team — or even a structure with a flat organisational model — can really create a culture reset. Many societies around the world aren’t structured in such a way that can necessarily support diversity and inclusion.

From race and gender to socioeconomic upbringing and religion, you need to structure an environment that’s supportive of that. The changes we are making today in the business world are the shifts that soon will impact our views on governance, equality, sustainability in our societies and the tech space is the epicentre of these experiments to better society as a whole.

Please find more information on the upcoming Women in IT Summit, happening on the 14th September 2022, here.

Society 5.0: Building inclusive super smart societies — With the fourth industrial revolution well underway, the GMIS Summit in Dubai turned its attention to the concept of Society 5.0 and what this means for the future of society.

Diversity and Inclusion
Emerging Technologies
Women in IT Summit