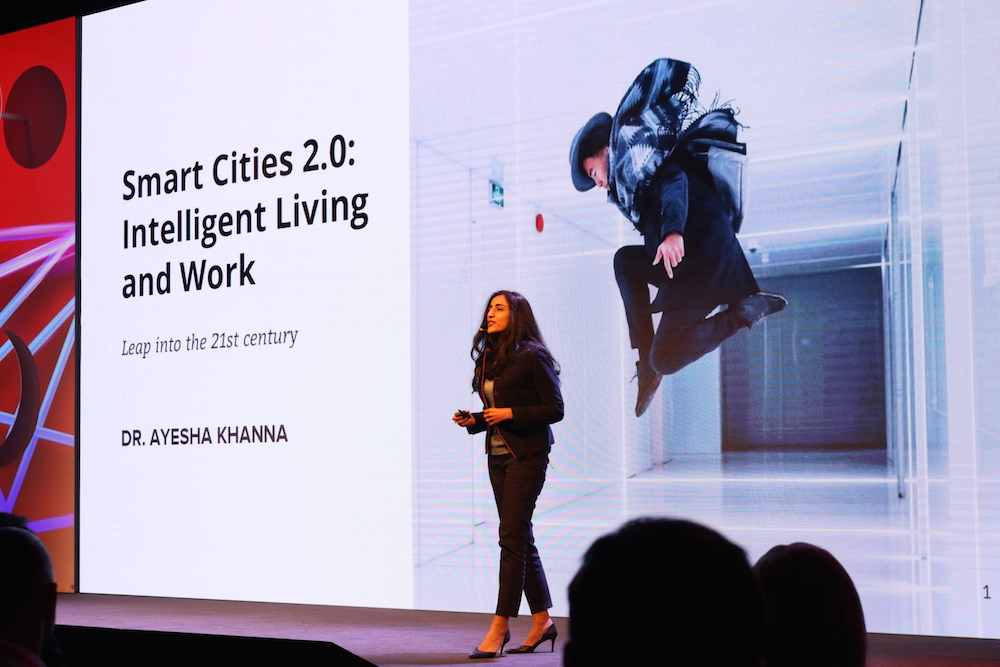 When I attended the Fujitsu World Tour in Stockholm earlier this week, my eyes were opened to an array of new and developing innovations as well as their countless applications. I particularly enjoyed Dr Ayesha Khanna’s presentation on the impact of intelligent technology. Dr Khanna who is Co-founder and CEO of ADDO AI, Singapore, focused on smart cities and how human-centricity is key to their success.

Perhaps, the reason I was so interested in smart cities that morning was due to the fact that I had just had my first trip in a driverless bus. The bus developed by Noina, which rides along a 1.5 kilometre pre-recorded path at a speed of 20 kilometres an hour using GPS and sensors, was a pertinent mode of transport to the event, as it displayed to me how new technology is already changing our lives right now.

As Khanna touched on in her presentation, smart cities are becoming more prevalent, due mainly to the rise in urbanisation. For context, research suggests that by 2070, over 70% of humanity will be living in cities.

This is is putting a great deal of pressure on the infrastructure and public services that people move to cities for. This brings us to understand why the concept of a smart city is so important.

The idea of a smart city is not new, we’ve always looked to incorporate new technology in our cities. However, according to Khanna, there has been a shift. Khanna believes that in the past, efforts to enhance a city have been mainly principled on the idea of simply incorporating new technology, however, this focus on new and shiny technology will not alone enhance the city.

Khanna was approached by the Dubai government with a problem. They had attempted digital transformation by integrating 53 government agencies into one online platform so that instead of citizens having to go from agency to agency, they could just come to one app and pay for the likes of taxes and tolls, as well as setting up things like utility accounts with greater ease. However, despite this being a great idea, they were challenged by the fact that the engagement was very low.

>See also: Taking the mystery out of digital personalisation

Khanna said: “We went to them and said that the reason for the low engagement is because you are treating citizens like grey blocks. Why don’t you treat citizens the way an Amazon or a Netflix treats them, by personalising the experience, by giving people the right information at the right time.

The idea was to be data-driven in classifying the interest of people.

We took on this challenge for Dubai and now we’ve shown them a prototype and we are working on how to build the distributed data architecture that we need to scale it across the Emirates.”

Khanna’s point here is very on trend with most businesses who are trying to personalise their offerings. Companies only need to look at the likes of Amazon where 35% of their sales are driven by personalised recommendations at the bottom of the page. This relationship with the end-customer is valuable and smart cities should know this.

Perhaps, one of the biggest trends impacting practically every sector right now is servitisation. This term is used to refer to what appears to be a paradigm shift in how business models are changing structure, which is seeing organisations that typically just sold products now selling services in order to future proof themselves from commoditisation.

Organisations are doing this because it is seen as a more sustainable way to grow a business and leads on the idea that there is more value in creating a system that connects products in useful ways to solve problems.

>See also: Digital transformation in manufacturing is driven by customers

Despite this being a widespread trend, when it comes to smart cities, it isn’t being applied enough. Khanna explained how her company was approached by a leading transport organisation in Singapore who wanted to grow their revenue. Interestingly, Khanna had previously completed a PhD on “mobility as a service.” Khanna suggested that instead of  merely adding new technology or products, that her company further develops its service.

Khanna looked at what people wanted from a transportation service and  suggested that they work all the other modes of transport to make a better, more efficient, combined service.

She said: “Instead of having to go to different apps to find where you need to go, there is one service that integrates the buses, the trains and everything else that you need.”

Not just for rich countries

According to Khanna: “The smart city notion is not only for Stockholm, London of Singapore, but it is applicable to all parts of the world and there are certain things that are fundamental for safety and security in poorer areas.

“There are millions of marginal farmers in the world that live between $1 to $4 a day and they are incredibly vulnerable to all kinds of risks, floods, pests, soil erosion. Nobody tells them when to sow a particular seed. They use age-old methods that they’ve been using for centuries.

Nobody tells them there’s a pest infestation coming and they need fertiliser. But with artificial intelligence, we can do just that. We are building a new platform that uses remote sensing satellite imagery and artificial intelligence to actually inform farmers ahead of time if there’s a pest infestation in a neighbouring village, or when they can expect rain.”

I think this point is very important indeed, as the concept of a “smart city” really does stir the imagination – people can think of it in terms of flying cars and robots, however, smart cities are about solving problems.