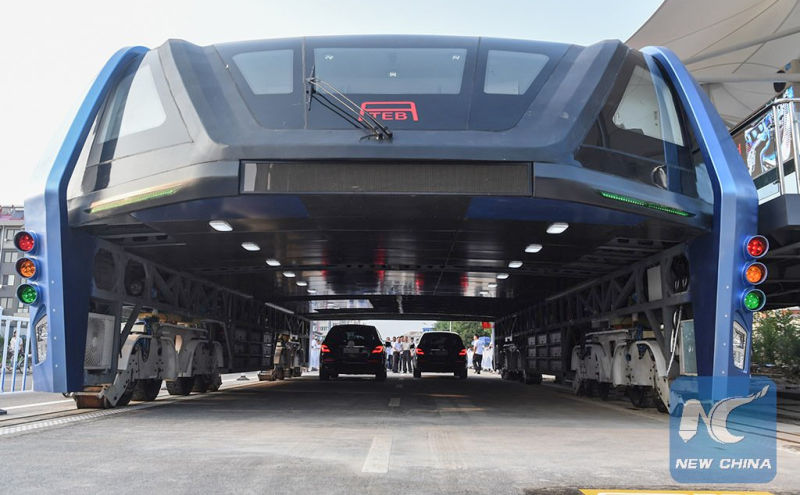 Horse and cart, the tram, the bus, the train, the tube…and now the elevated traffic-straddling bus.

China’s straddling bus ran its first test in the north-eastern city of Qinhaungdao, in the Hebei province this week.

The transit elevated bus – TEB – is 2 metres high, 21 metres long, and 8 metres long allowing it passes over the cars below while carrying up to 300 people.

A mini-model of the bus first appeared at the 19th China Beijing International High-Tech Expo in May.

The fact that a prototype has been built so quickly is a testament to the Beijing firm that designed it.

"The TEB has the same functions as the subway, while its cost of construction is less than one fifth of the subway," an engineer called Bai Zhiming told news outlet CCTV.

Not only will the TEB cost less but it “will save lots of road space," the project's chief engineer, Song Youzhou, told state-media agency Xinhua earlier this year.

Like most modern public transport systems in China the bus will run on electricity and one could replace up to 40 buses.

This would cut annual fuel consumption by 800 tons and carbon emissions by almost 2,500 tons, according to an interview with the chief engineer, Youzhou.

Perhaps the main goal in pursuing the TEB was to ease China’s traffic problem, which sees 20 million new drivers using the roads each year and where traffic jams can last for days.

It is a feat of innovation, progress, and regardless of intention, environmentally friendly, and an example to follow.