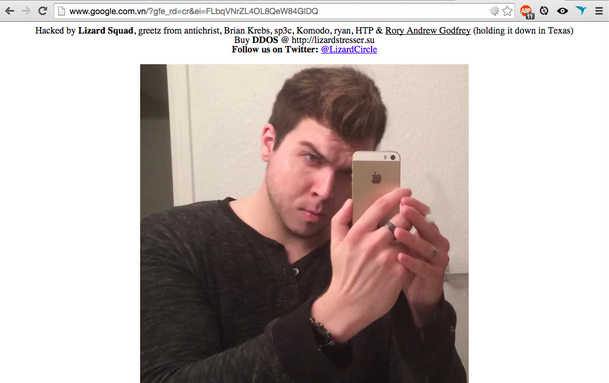 Internet users trying to access Google in Vietnam this morning were directed to a website claiming the internet giant had been hacked.

The redirect was a splash screen saying “Hacked by Lizard Squad, greetz from antichrist, Brian Krebs, sp3c, Komodo, ryan, HTP & Rory Andrew Godfrey (holding it down in Texas)” and an image of a man taking a selfie with an iPhone.

It also pointed users to “Buy DDOS @ http://lizardstresser.su” and to the Twitter account @LizardCircle. DDOS stands for distributed denial of service, which is a kind of cyber attack that takes down a service by overloading the servers.

The website lizardstresser.su is a service called Shenron, which describes itself as the only underground market accepting PayPal and is hosted at a Bosnian internet provider home to many malicious sites.

The attack appears very similar to a hack in October 2013 on Google Malaysia, in which a Pakistani group took credit with a splash screen before taking the website offline completely.

The group hacked into the Malaysia Network Information Centre (MYNIC), which administers web addresses that end with .my in Malaysia, and conducted a domain name system (DNS) attack that redirected visitors to hacker-controlled servers.

This time it is thought that the hackers targeted the Vietnam Internet Network Information Center (VNNIC), the national internet registry that manages the .vn top-level domain in Vietnam, through a similar technique.

A Google spokesperson said Google searches and services like Gmail weren’t compromised, adding: “We’re aware that some users have been having trouble connecting to google.com.vn, or are being directed to a different website.

“We’ve reached out to the organization responsible for managing this domain name and hope to have the issue resolved shortly.”

Last month, an 18-year-old man was arrested in the UK as part of an investigation into cyber attacks on Microsoft and Sony, which the Lizard Group took responsibility for.

It has also claimed credit for attacks on Facebook, Tinder and Malaysia Airlines.